In a 5-4 decision issued today, the nation’s highest court declared the individual health insurance mandate constitutional, upholding the central provision of President Barack Obama’s Patient Protection and Affordable Care Act of 2010. Yet of course most of the talking heads fail to grasp what the Supreme Court did say which is very important. There has been a serious expansive interpretation of the Commerce Clause in the Constitution that has allowed the Supreme Court to hand the government endless power to do as it likes. The Commerce Clause that has been used to expand federal government far beyond what was ever intended, reads simply:

“To regulate Commerce with foreign Nations, and among the several States, and with the Indian Tribes.

The Supreme Court has abused the judicial power for more than a century ruling that this clause has been really without limit. It was simply intended by its plain language to ensure that free trade would exist between the states. Instead, it has enabled Congress to regulate just about anything it desires. There has been no requirement regarding free trade and in effect has allowed government to obstruct free trade – not preserve it.

The arguments that the Commerce Clause afforded the government the power to impose mandatory regulation concerning health care was for the first time rejected. Interestingly enough, the court stated there was no power to regulate individuals precisely because they are doing nothing would open a new and potentially vast domain to congressional authority. Had Obamacare been upheld under the Commerce Clause, then they could have imposed any regulation whatsoever.  Congress could have passed any act that would have the same effect such as they could have imprisoned you for being unemployed since that affects COMMERCE. The importance of defeating this argument was paramount. It had nothing to do with whether or not the object of the legislation was healthcare. ALL acts could have mandated you do something or go to prison. Congress already possesses expansive power to regulate what people do. That is the real problem.

Upholding the Affordable Care Act under the Commerce Clause would give Congress the same license to regulate what people do not do. The Framers knew the difference between doing something and doing nothing.  They gave Congress the power to regulate commerce, not to compel it.  Ignoring that distinction would undermine the principle that the Federal Government  is a government of limited and enumerated powers.  The individual mandate thus cannot be sustained under Congress’s power to “regulate Commerce.”

The second argument was that government could order individuals to do whatever they want under the Necessary and Proper Clause as an integral part of the Affordable Care Act’s other reforms.  Here the Court reasoned that its prior cases upheld various laws under that Clause because they were a “derivative of, and in service to, a granted power”. The individual mandate would provide Congress with the authority to create the necessary requirements to compel people to do things not specifically as part of a granted power. If the individual mandate is “necessary” to the Affordable Care Act’s other reforms, then this type of an expansion of federal power is not a “proper” means for making those reforms effective.  This reasoning of the Court seems less compelling. To uphold the Act, the Court reasoned it was a tax, even though Obama argued originally it was not.

Justice  Ginsburg,  was joined by Justices  Sotomayor, Justice  Breyer, and Justice Kagan in part dissenting. She wrote: “I would hold, alternatively, that the Commerce Clause authorizes Congress to enact the minimum coverage provision.  I would also hold that the Spending Clause permits the Medicaid expansion exactly as Congress enacted it.”

The dissent is serious. For here we find that their view of the Commerce Clause has nothing to do with ensuring free trade among the states, but that Congress has the power to regulate anything it desires. They could regulate divorce for the money involved touches commerce. They could regulate allowances to your children or how much you donate to anything. There is absolutely nothing that Congress could not regulate.

Therefore, the right wing press is already up-in-arms as are the Republicans. However, the more important issue here is the scope of regulation that the dissent would have voted for. The fact that Obamacare was upheld under the taxing authority, was in fact the best possible outcome. Forget about the healthcare and where you fall on that issue, the critical factor is this pervasive view that government can regulate anything it desires and could imprison you for NOT doing whatever it mandated.

So the silver lining this time was limiting the power of government to taxing powers. For that, we must once again thank Karl Marx for the founders of the United States had included a clause that forbids any such taxing power. 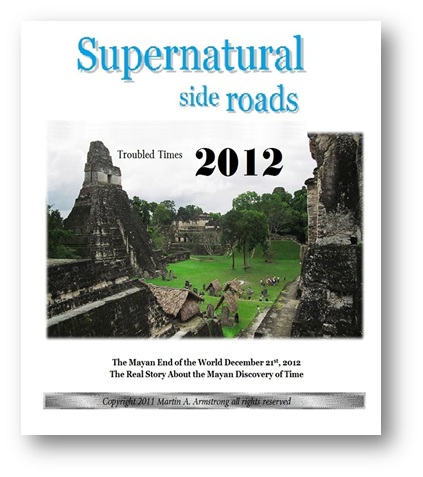 To be Published This Summer

This is a special report unlike anything out there. The full data on the shifting of the magnetic poles has been included showing the earth cycles derived from scientific exploration of the ocean floor where the strips of lava are magnetized to where the north pole is at that point in time. While many have hyped the Mayan Discovery of Time couching it in the typical doom and gloom, what they missed is their real discovery that is far more fascinating that the pretend end of the world. What we are witnessing are earth changes that are also normal and on a cyclical schedule. Is the worst yet to come?