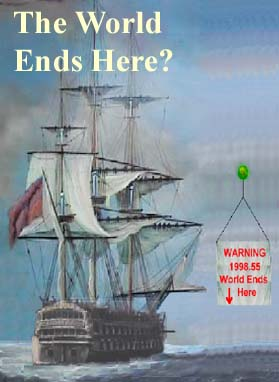 The sheer chaos that is unfolding within the financial markets has now reached a level that simply requires government intervention within the foreign exchange sector. We have warned repeatedly that government intervention is wrong and that it disrupts the world economy by attempt to force the free markets to move in a direction counter-trend to the true underlying economics. The big trade that everyone was on was long the German mark and short the Japanese yen. This cross has fallen from 8308 to 6990 is 4 days. This in part was another phase of the great Euro trades that are now causing a global meltdown of untold proportions.

The political aspirations of the great Euro merger has set the world economy is a very dangerous position. By telling the world that on January 1st, 1999 all member states of EMU would have the same interest rates and that their bonds would all be converted into Euros, they set in motion a giant wave of capital that sought the perfect “riskless” trade of the century. Long Term Capital Management was at the top of the list buying all the weaker bonds of the Euro members and shorting that against the German. This trade caused the miracle convergence of interest rates within Europe without any cost to the governments. Politicians took the credit for their wonderful vision, but in reality we are now paying the dire price for this folly.

Continental Europe had itself become an “emerging market” with capital betting on reform that would sweep the region. Economists joined in and touted how the Euro would replace the dollar in world trade and Europeans cheered. The nationalistic fever from some European states painted pictures of Europe becoming the largest economy in the world shifting the balance of power away from the United States in a vain attempt to resurrect the 19th century. But in the same manner as capital bid up Russia on expectations of long-term future gains, the same became true in Europe. No one bothered to ask the hard question…Just how long would economic convergence really take? Stocks were bid up on visions of grandeur and hedge funds were enticed into convergence trades assuming that this was what the safest bet in town behind the guaranteed investments in Russia based upon the IMF.

We have been living in a world where intervention has been the name of the game. It has cost governments precious little more than words. But it is now the lack of words coming from the G7 and its failure to reach any coherent policy that now threaten to topple the world economy is far more damaging ways than even we dare to speculate. The collapse in the dollar has not been caused by speculation against the dollar but by liquidation of cross-rates. However, the collapse in the dollar has now wiped out whatever profits the Japanese banks may have had on the foreign holdings. If anything, this rise in the yen may now seal the fate of Japan and push everything over the edge.

Transactions in the Nikkei have now shifted. The rise in the value of the yen is causing selling from overseas sending the index down. The Nikkei has fallen to our Yearly Bearish Reversal of 12,882 and a move below this area now threatens to send this index plummeting toward 9700. Capital around the globe is running in every direction toward liquidity and safety. This suggests that there will be no foreign buyers in almost any country as capital retrenches back in time. The interbank market has also collapsed, as dealers cannot possibly cope with the risk causing market-making to vanish rapidly. All this amounts to is less liquidity and higher volatility.

We must now remain very concerned that the collapse in the dollar could lead to a knee-jerk liquidation of US and European bonds by Japanese banks that woke up to find the balance sheets vaporized this morning. While this trend is being offset by a rise in demand from domestic capital turning away from equities moving toward bonds within the US and Germany, we could now transpose volatility into the government bond markets globally as well. Repatriation from the US investors now scrambling to get out of Europe may harm also spill over causing the Euro to be postponed entirely. If the European politicians fail to comprehend the seriousness of what has just now taken place and refuse to postpone the Euro, then we fear that the entire EMU will simply blow up next year.

While the US share market has not been affected directly as yet, there is little hope that this will NOT spill over causing a sharp drop down to 899-903 on the S&P 500 futures if not 844. The European share indices perhaps have an even direr outlook. Given the fact that German pension funds were fully invested by law, they cannot support the market during a decline without an emergency revision of the investment regulations—something that is not likely to be recognized before it is too late. With Americans bailing out of Europe and European institutions fully long, there is no underlying support that is nearby. The Dax shows some support at the 3523 area followed by 3000-3170. Nonetheless, a move down to 2829 may now become inevitable. While CAC40 shows some support at the 2467 level, once that area gives way, this market shows some minor support at the mid 2200 area but nothing of any long-term consequence until 1700-1800 area.

Surprisingly, gold has not responded suggesting that capital is not looking for another investment to run into, but rather a place to go that is entirely neutral. The lack of counter-trend reactions in even the dollar/yen is again a warning sign that we are dealing with liquidation and NOT new speculation. Short positions are typically quick to take profits causing a counter-trend reaction rally. So far, there have been no reaction rallies and instead we find brief sideways consolidation periods at best. This again is the telltale sign of massive liquidation.

The dollar/yen itself has been a massive casualty in the global liquidation crisis. The two key levels are 11800 and 11060. The 11800 level remains the Quarterly Bearish Reversal and 11810 is also a minor Yearly Bearish Reversal. Therefore, this area will now become an important pivot point. Technical lines in the sand show resistance at 12370 and support at 10800-10650. There is little doubt that a penetration of the 110 area would lead to a move down to the 108-106 zone. While our computer models correctly forecast a Panic for Wednesday and a potential intrday low for Thursday of this week, we do show that if today’s low on the dollar holds, then the worst is over. Next week itself is also another Panic Cycle warning that we could see a rebound if support holds depending upon Friday’s closing.

Our concern for the overall picture here is that virtually every investment known to man is moving in a direction to cause the maximum amount of damage within the world economy. The consequence of a strong yen will now push Japan over the edge worsening the economy depression as further asset deflation takes hold. We see no way out of this box for Japan other than to start printing yen. What Japan needed was a weaker yen and that is where the natural capital flows were taking it. However, for pure political reasons, Japanese officials maintained that they wanted to see a strong yen, despite the fact that the Japanese banking crisis may now rise in excess of 30% of GDP. This decline in the dollar/yen, despite its magnitude, has in no way changed the course of the underlying economics. While everyone is worried about the banking crisis, the pension funds in Japan are being destroyed. We are looking at the social safety net in Japan coming under attack for two reasons. First: Japanese pension funds need to make 5% in yen terms when they can collect barely 1.5% within their own economy. The government has been trying to bail out the banks through maintaining extremely low interest rates. However, this puts at risk the corporations in Japan as well as the pension funds. Secondly: those institutions that have been investing overseas are now suffering from major losses due to recent moves. The events of these past few days have now insured a further economic deterioration in Japan that ultimately leads to the monetization of its problems which in turn will still result if dollar/yen reaching 278 by 2003.

These recent events will undoubtedly cause a few more dead bodies to fall out of the closets. Exactly who and when is difficult to say. Nonetheless, there is a high probability that liquidity will not return soon and that the natural economic conditions will eventually determine the fate of all nations. The failure of the IMF has set the stage for this global economic disaster. The failure of the G7 to come to some cohesive strategy over the weekend has led capital to throw in the towel this week. The US must STOP trying to resurrect the IMF. They cannot restore confidence in the emerging markets by flushing another $18 billion drain the drain we call the IMF. The contagion has arrived. It is now within our midst and if spreading from sector to sector. Our illustration here if from our special report of 1997. It now stands as a testament to something perhaps none of us want to hear. We must give up on the idea of the IMF—it won’t work anymore! The Euro must be postponed before a second shock wave takes hold next year. Japan must now deal with the issue of its banking crisis and use public funds, through monetization, to begin a workout of the bad loans. The Fed must stand pat and resist lowering interest TOO FAST or it may accelerate the liquidation process and further complicate the delicate international capital investment flows. Unfortunately, the ripple effects of all these events have yet to fully impact the world at large. That, however, is only a matter of time and in today’s atmosphere this could be only a matter of a few weeks.