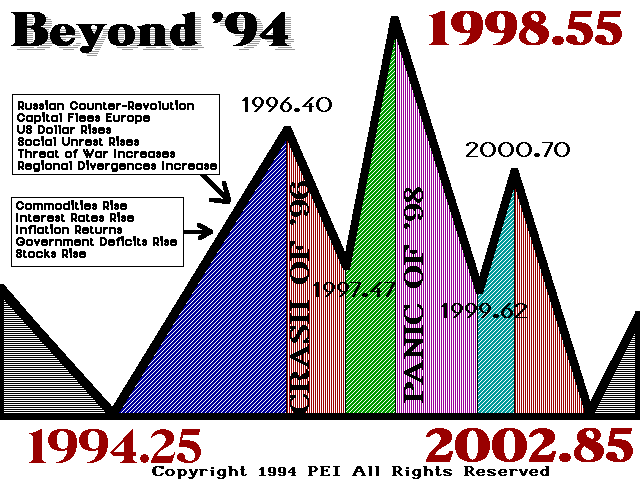 So far the markets that have reached a major high precisely to the day with our July 20th, 1998 target have been the US and European share markets. It is important to understand that this model is a global business cycle derived from a case study of all market activity regardless of sector or origin. Consequently, the purpose of this model is NOT to forecast any SPECIFIC market, but rather to draw our attention to major global investment trends.

It has been the Princeton Economic Confidence Model that has helped many of our clients as well as ourselves understand more fully how both the world economy functions on an interactive basis and investment which is ultimately influenced by those same trends. Simply put, capital cares less about the underlying investment sector as well as the nation in which such trends occur. As a result, capital tends to concentrate globally within on region and/or one particular sector for each turn in the business cycle with the ONLY prejudice being profit.

The name “Economic Confidence” was selected because all investment and economic activity is driven by human emotions. When capital believes in something, it will freely invest within that sector causing it to become the flavor of the month, year or period. When confidence is lost, severe economic declines unfold, which in turn are typically referred to at times as “depressions.” An economic “depression” is a trend in which confidence is lost and when that develops, capital tends to be hoarded thus causing a sharp decline in economic activity. Prolonged periods of economic depressions have occurred throughout history following the complete collapse of various empires such as Greece and Rome. We find that such prolonged periods of economic depressions have often been referred to in turn as “dark ages.”

To understand the Princeton Economic Confidence Model is in itself the pursuit of knowledge. It is not the attempt to forecast to the precise day of the high years in advance that captivates our fascination, but why such a model should work at all. Thus, the Economic Confidence Model itself has sparked its own wave of discovery among our many clients. Others have taken this model and found incredible correlations to economies and political trends in nations we have never explored. This model is even being taught in political science at the university level. It is the sheer way that this model has divided history and trends into business cycle formations that has indeed allowed for a much better understanding of our political-economic environment. Perhaps our own social behaviour remains that last great frontier awaiting man’s need for discovery in our quest to touch the face of nature in understanding the world economy and its core function. It is this very quest that has established the avenues of economic research and its often divided philosophy between those who wish to control and manipulate mankind and those who believe that we are but only mortals along for the ride. It is clear that we cannot control our own economy if we do not fully comprehend its core being. And in this debate, lies the shift between the forces of confidence as it moves between government dominance and control of mankind even with the best of intensions and the belief in the human right of freedom without government dictates be it unnecessary regulation, socialism or communism.

We cannot understand the current turning point without also understanding at least its immediate past. The 1981.35 turning point marked the end of a Public Wave and thus the confidence in government itself. This ushered in Reagan and Thatcher and the beginning of a reform process in government in the United States and Great Britain that would ultimately set in motion a global trend that shall continue until 2032. The 1985.65 turning point marked the peak in the dollar (low in European currencies such as pound at $1.03). The 1987 turning point marked the Crash of 1987 precisely to the day October 19th, 1987, sparked by the G5 and currency manipulations. The 1989.95 peak was the top of the first 8.6-year wave in the new Private Sector 51.6-year wave that began in 1985. This wave saw the continuation of the collapse of big government with major changes in China and Russia both hit during the second half of that year. But this turning point also marked the peak in western economic activity as recession appeared in the US and UK while Japan experienced the peak in its economy, Nikkei and big government. The collapse of big government policies in Japan is still ongoing today. But more importantly, as capital withdrew from Japan and the West in general, it began to shift into emerging markets. This trend lasted for 4.3 years and peaked in April 1994 on the next turning point of our model. It was 1994.25 that marked the end of emerging market investment and the shift into the US and European stock markets. It is this trend that is now in danger of coming to an end here on July 20th, 1998. While many people see the Asian Crisis and Russian Economic Meltdown as comparatively recent events, in reality, those trends were set in motion when capital began to shift away from emerging markets in 1994 and into US and European domestic investment. It the capital withdrawal from Asia and Russia that has allow the stock markets to boom in the US and Europe while exposing the weaknesses and unrealistic expectations for immediate change in emerging market economies.

In reality, the Economic Confidence Model allows one to view the world as never before. By correlating the world economy, it becomes clear that there is not enough capital in the world to create a boom everywhere simultaneously in the same manner as we all cannot have a trade surplus simultaneously. One nation’s gain ALWAYS comes at the expense of its neighbor. This is a lesson the G7 has yet to understand. The big booms in investment unfold as capital concentrates thus causing a particular market or sector to suddenly explode with activity gathered on the wind of international capital. This global collective behaviour has been the strong force behind the bullish trends in the US and European share markets that have acted like a bug light attracting capital from around the world into these sectors. As of July 20th, 1998, these trends will begin to shift. This does NOT mean that we should expect IMMEDIATE declines that are obvious. Instead, we suspect that the summer will offer a period of consolidation and that any sharp and persistent decline may NOT unfold until the first or second week of September moving into October.

In order to understand the importance of this July 20th target date we must NEVER assume anything. Even at PEI we do NOT simply ASSUME that July 20th will be the all time high for the stock markets in this century. This certainly may prove to be the case. However, we MUST always respect that the ONLY infallible forecaster of the future remains the marketplace itself. What our model offers is merely a window in time highlighting when we should be concerned about potential changes in trend. Thus, there will be several KEY confirming signals that will determine the future and the potential for a 2-year correction ahead.

These are the three confirming signals that MUST be achieved this year in order to suggest that we will see a 2-year correction into 2000 or at least a 1 year decline into May-July 1999. Accomplishing these goals will then CONFIRM that the July 20th target represents a major turning point, as was the case in 1981, 1985, 1989 and 1994.

Those who are traders should ONLY seek to use this information if you are taking our full daily service that will provide the daily and weekly turning points along the way. Things can and do change. We will undoubtedly see a test of key support followed by an attempt to rally this market once again. The importance here remains that until we achieved at least a daily closing BELOW 1169.40, we cannot merely assume that the July 20th high will hold.