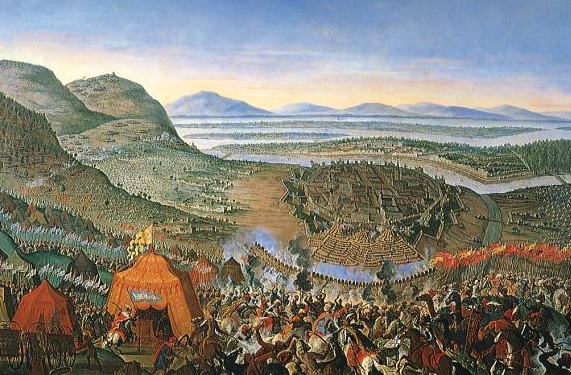 The Financial Panic of 1683 emerged from the Battle of Vienna on September 12 when the Ottoman Empire laid siege to the city for two months which was finally broken with the arrival of a force of 70,000 Polish, Austrians and Germans under the Polish-Lithuanian king Jan III Sobieski. The siege of Vienna by the Ottomans set off a financial crisis given that this was the capital of the Holy Roman Empire. The defeat of the Ottomans was the turning point in the fortunes of their Empire.

As the Ottomans attempted to invade Europe, financial panic gripped the continent and capital began to flee northward seeking shelter in Amsterdam where the first formal bank emerged.  Wisselbank in Amsterdam had begun in 1609. It was accepting deposits of coin until this capital flight northward caused by the Ottoman invasion. Beginning in 1683, Wisselbank began to accept even deposits of raw bullion.

While the Ottomans were engaged in the north, in Greece they suffered their only loss to the Venetian Empire. It was the conquest of the Morea (Peloponnese) peninsula in southern Greece that was really to avenge the Venetian loss of Crete in the Cretan War (1645–1669). Consequently, the Morean War holds the distinction of being the only Ottoman–Venetian conflict from which Venice emerged victorious, gaining significant territory in Greece. However, Venice’s gains were quickly reversed by the Ottomans in 1715.