The city state of Leontinoi was found in 729 BC by Chalkidans who migrated from Naxos. The monetary system of this city state did not take form until about 480 BC when it came under the rule of Gelon the tyrant of Syracuse. As we can easily see from the above illustration, the influence of Syracuse upon the style of Leontinoi’s early coinage is unmistakable. 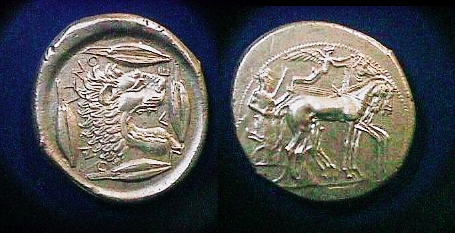 For seven years, Gelon sought to rule as much of Sicily as he could making Syracuse his seat of power. Under Gelon’s rule (485-478 BC), Syracuse rose to become the greatest of the Sicilian city states. In 480 BC, Carthage invaded Sicily, but was defeated by Gelon at Himera. This great victory over the Carthaginians brought Syracuse to an unquestionable dominant position within Sicily. But with the death of Gelon, Leontinoi coinage began to take on its own unique characteristics of a Lion’s head. 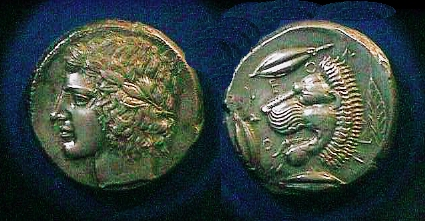 Leontinoi remained under the firm control of Syracuse until 466 BC, when she regained her independence and its coinage reflected this new found freedom. The charioteer and his quadriga, a Syracuse design denoting denomination, disappears from the coinage being replaced by the laurel head of Apollo. It was during this period of independence when the city came alive and propered in Sicily.

Circa 355 BC under Syracuse