The Monetary History of
Macedonia

Macedonia is located in the extreme northern regions of Greece between Thrace and Thessaly. The coastal regions of Macedonia and Thrace appear to have been colonized between the Eighth and Seventh centuries. The interior of these regions was occupied by indigenous tribes who gradually became influenced by the Greek culture. During the golden age of Athens, Macedonia was considered to be outside the Greek World made up of uncivilized barbarians.

The great kingdom of Macedonia originally began at the city of Aigai, which became important, rich and powerful under its king Alexander I (495-454 BC). Alexander I enlarged his kingdom following the retreat of the Persians from Greece in 479 BC. It was, therefore, Alexander I who began what would become the Kingdom of Macedonia and he was also the first king to strike his name on the coinage. Alexander I was a Philhellene and considered himself as “a friend of the Greeks”. He even wanted to take a part in the Olympic games but the Greek athletes protested, saying they would not run with a barbarian.

The Athenians began to expand their own territory founding the city of Amphipolis around 436 BC to the East of the growing kingdom of Macedonia. With their intrusion into the region, Perdikkas II (454-413 BC), son and heir of Alexander I, began a political alliance which became known to history as the Chalkidian League in 432 BC. As Macedonia began to grow, it was Archelaus 413-399BC), son of Perdikkas, who transferred the capital and seat of power to the South at the city of Pella. Archelaus began to modernize the new kingdom bringing a rule of law, roads, and fortresses to Macedonia. This modernization had a price and Archelaus was assassinated after a reign of 14 years in 399 BC ushering in a period of political confusion.

Archelaus was eventually succeeded by the guardian of his son Orestes who seized the throne. Thus Aeropos (396-392 BC) now ruled Macedonia for the next four year period until the illegitimate son of Archelaus, Amyntas II (392-390 BC), came to power. Once again power changed hands this time passing back to the son of Aeropos – Pausanias (390-389 BC). However, this usurper’s reign was short lived as a great-grandson of Alexander I came to defend the throne of Macedonia. Amyntas III (389-383, 381-369 BC) restored the throne to the royal bloodline of Alexander I and the monetary system of Macedonia as well. His reign, however, was interrupted between 383 and 381 BC when he was expelled by the invading forces of Illyrians. With the support of Sparta, Amyntas III returned to the throne in 381 BC.

Following the death of Amyntas III, the throne passed to his eldest son Alexander II who was assassinated by Ptolemy within less than one year. Ptolemy then ruled as regent for the two youngest sons Perdikkas III (365-359 BC) and Philip II (359-336 BC). Perdikkas III never forgot and in turn, he murdered Ptolemy in 365 BC taking back the throne. Six years later, Perdikkas III was killed in battle against the Illyrians thus passing the throne to his younger brother – Phillip II.

Philip II had been held as a hostage by the rival Greek state of Thebes, from 367 to 365. During this period, Thebes was certainly the greatest power in all of Greece. It was during his period of captivity in Thebes where Philip II observed the military techniques of this great power state. No doubt, Thebes may have fueled the ambitions of Philip and even allowed him to nurture his military skills. In 364 BC Philip returned to Macedonia and in 359 he was made regent for his infant nephew Amyntas. Later that same year he seized the Macedonian throne. Philip’s rise to power came at a time when the Macedonians had just suffered a major defeat at the hands of the Illyrians leaving Macedonia in political and military chaos. Philip immediately brought Macedonia under his control and within just two years he established both the security of his kingdom and a new dynasty for himself and his family.

In 358 BC, Philip was prepared for conquest and he succeeded in defeating the Illyrians. Philip then sought to bring all of Upper Macedonia under his control. His rise to political power transformed Macedonia into a new world power. With strategic cunning, Philip sought to consolidate his power by creating alliances and strengthening loyalties through the ultimate diplomacy of marriage. In 357 BC he married Olympias who was of the royal house of Molossia. One year later Olympias bore Philip a son, Alexander III The Great.

Philip eventually divorced Olympias and Alexander fled from his father’s side. As time past, Alexander was allowed to return, but he remained isolated and estranged from his father and quite insecure until Philip was assassinated in the summer of 336 BC.

In 357 BC, Philip II conquered the Athenian colony of Amphipolis in Thrace and with it the gold mines of Mount Pangaeus. This resource of great wealth financed his wars. In 356 BC, Philip then captured Potidea in Chalcidice and Pydna on the Thermaic Gulf. In 355 BC, Philip went on to take the Thracian town of Crenides, which later became known as Philippi. In 354 BC, Philip conquered Methone and advanced into Thessaly. In 351 BC, the great Athenian orator Demosthenes delivered the first of his Philippics, which were a series of speeches warning the Athenians about the Macedonian menace to Greek liberty.

In the spring of 336 BC, Philip II began preparations for his next goal – the conquest of Persia. Philip sent Attalus and Parmenion with 10,000 troops to cross over into Asia Minor. Philip’s quest to conquer the Middle East was not achieved in his lifetime. Just prior to his planned departure for Asia, Philip II was assassinated and the rest was left to his son – Alexander III The Great (336-323 BC)

Alexander III The Great’s (336-323 BC) conquest of the known civilized world through Asia Minor, Persia and eventually Egypt was a feat of untold proportions in ancient times. However, the conquest of the world was very much on the back of one man. With Alexander’s death in June 323 BC, in Babylon, a power vacuum emerged. the following four decades were marked by civil war. A compromise was reached with the feeble-minded half-brother of Alexander, Philip III Arrhidaeus (323-317 BC), who shared the throne with Alexander’s infant son – Alexander IV. However, the true power still resided among Alexander’s generals – Perdikkas, Antigonos, Lysimachos, Seleukos, Ptolemy and others.

After a brief reign of only 6 years, Philip III Arrhidaeus (323-317 BC) was murdered by Olympias, mother of Alexander The Great. Power in Macedonia then passed to Kassander (319-297 BC) who was the son of Antipater, appointed Regent of Macedonia by Alexander the Great. Kassander was ruthless and cruel not to mention ambitious. In 311 BC he executed both Alexander’s widow, Roxana and her young son Alexander IV. In 305 BC, Kassander took the title of King for himself until he was overthrown by the son of Antigonos the One-Eyed of Asia Minor – Demetrios Peliorketes (294-288 BC). Demetrios promised freedom to the Greek cities in a bid to gain support against Kassander. The Aetolians entered into an alliance with Demetrios and Kassander marched against them with his allies Lysimachus, Ptolemy, and Seleucus.

In 288 BC, Demetrios Peliorketes was in turn overthrown by Lysimachos of Thrace and Pyrrhos, king of Epirus after Seleucus, Ptolemy, and Lysimachus formed a coalition to block plans by Demetrios to invade Asia. During the period of 288-277 BC, no one was able to hold the throne of Macedonia. Finally, in 277 BC, the son of Demetrios, Antigonos Gonatas (277-239 BC), took the throne of Macedonia after defeating the Gallic barbarian invasion in Thrace. Gradually, the Kingdom of Macedonia began to prosper once again. Following the death of Antigonos Gonatas in 239 BC, the throne passed to his son Demetrios II (239-229 BC) who ruled during a very troubled period. Barbarian invasions from the North resumed and finally, Demetrios II fell in battle against the Dardanians in 229 BC.

Demetrios’ son was still too young to take the throne at the time of his death. Thus, the Macedonian throne was controlled by his older cousin Antigonos Doson (229-221 BC), who restored the Kingdom and stabilized the power of the throne. Upon his death, the throne indeed passed to Demetrios’ son Philip V(221-179 BC). While Philip V showed great ability, he had to face an enemy who was simply too powerful – Rome. Despite a valiant attempt at holding his kingdom, Philip V was defeated at the Battle of Kynoskephalai by the Roman general T. Quinctius Flamininus in 197 BC, but Philip V was still allowed to rule Macedonia until his death in 179 BC albeit as a subservient state of Rome. Philip V was succeeded by his son Perseus (179-168 BC) who attempted to restore the glory of Macedonia. At the Battle of Pydna in 168 BC, Perseus was defeated and sent into exile in Italy where he died 2 years later – the last of the Macedonian kings. 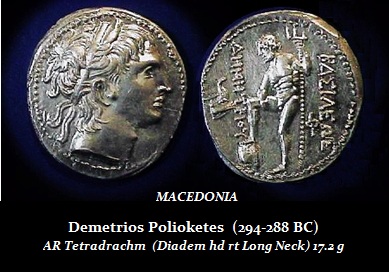 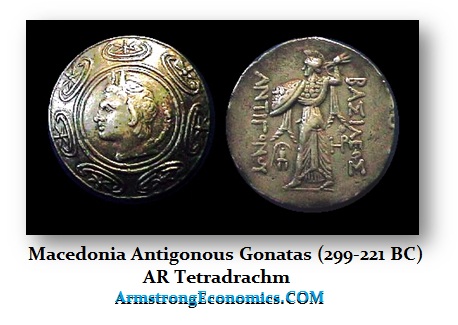 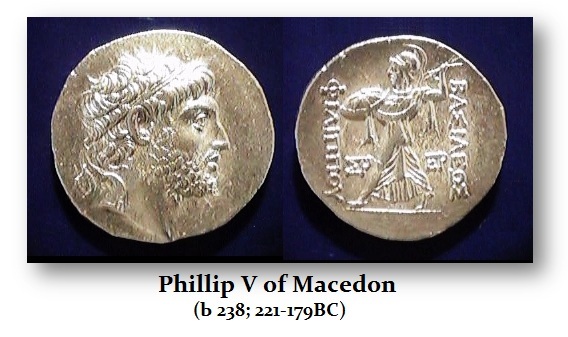 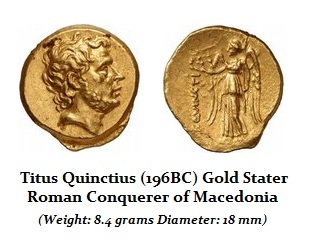