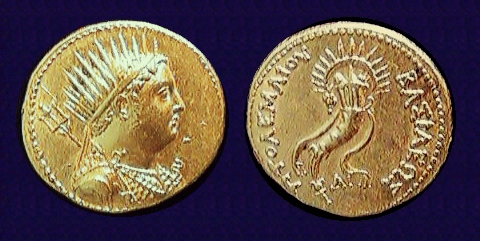 Ptolemy IV Philopator (“Father-loving”) was the son of Ptolemy III and Berenike II and the fourth ruler of the Ptolemaic Dynasty. He was married to his sister Arsinoe III. Ptolemy IV was not the man his father was lacking both his moral strength and character. He was more interested in the pleasures of life and was famous for his drunken orgies. Ptolemy IV preferred to leave affairs of state in the hands of his corrupt minister Sosibios. His only noted accomplishment was to defeat the invading army from Syria under Antiochos III. He died in the summer of 204 BC at the age of 40 leaving only a 5 year-old son as his heir. Following his death, two of his powerful ministers executed his wife, Arsinoe III. As government fell into the hands of his ministers, most of the overseas territories of the Egyptian Empire were lost.