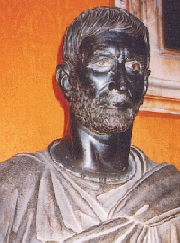 According to Roman tradition, Lucius Junius Brutus was the “Founder of the Republic.” Lucius served as Consul in 504 BC and is said to have taken a leading role in expelling King Thrquinius Superbus, the last of the Etruscan kings.