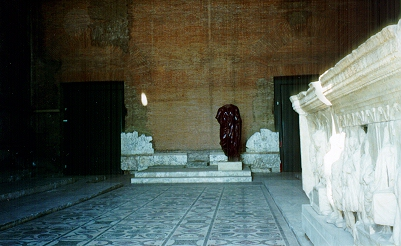 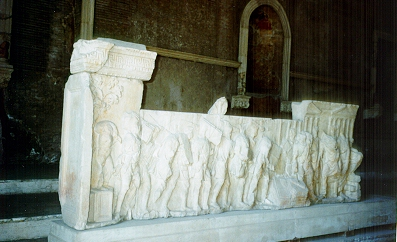 The Curia Julia was the building within the Forum that corresponds to the room in which the Senate of Rome met. It was founded by Julius Caesar in substitution of the Curia Ostiha. The Curia was left unfinished at the time of Caesar’s assassination, but it was eventually completed by Augustus in 29 BC.

Augustus chose the Goddess Victoria (Victory), as a guardian divinity of the Senate. A beautiful golden image of her was placed at the centre of the Curia. Two beautiful bronzae doors, commissioned by Julius Caesar, greeted all those who approached. (See doors)

In 283 BC, the Curia was severely damaged by a fire and was restored by the Emperor Diocletian. The Senate of Rome continued to utilize this building throughout the turbulent period.

The golden statue of Victory that had been in the Curia since the time of Augustus, became the center of many controversies at the end of the 5th century between the pagans and the Christians. Obviously, the Christians wanted to remove it on the grounds that it was a false god. Eventually, the Christians prevailed. The Curia suffered, like the RomanForurn itself, as a consequence of the pillage and the fires caused by the barbarian invasions that led to the sacking of even the very heart of Rome itself – the Forum. When the Western Empire finally collapsed, the Senate continued to meet in the Curia, which changed its name at the time of king Theodoric to become “Atnum Libertatis.”

The once great Curia of Rome was finally abandoned at the end of the Gothic domination. On lts the ruins, in the 7th century, the churches of Saint Adrian and Saint Martina we rebuilt. These buildings, which included most of the Senate, allowed the conservation of what was leff of the glorious Roman Curia. 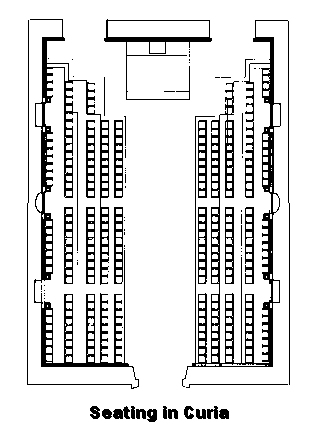