JUBA II was King of MAURETANIA and the son of King Juba I of Numidia. His father had supported Pompey against Caesar in Africa and continued to support the Pompeians even after the death of Pompey. Following Caesar’s victory, Juba I fled to Zama after the Battle of Thapsus where he had a slave kill him. 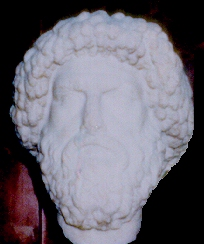 Bust of Juba I

Thus, Juba II he was taken to Rome in 46 BC as a child, following the death of his father. There he lived under the protection of both Caesar and Octavian while he was educated in Roman tradition. He was extremely intelligent and quickly gained the reputation for being one of the most learned men in the world. He became a early supporter of Octavian in his war against Marc Antony and Cleopatra. In 30 BC, following Octavian’s conquest of Egypt, Juba was married to Cleopatra, the daughter of Marc Antony and the Egyptian Queen Cleopatra.

Juba’s marraige to the daughter of Cleopatra and Marc Antony was clearly political in nature. Octavian sought a means by which he could stabilize Africa. Octavian therefore sent the prince to rule his own people. In 25 AD, however, Octavian, now known as Augustus, traded him Numidia for Mauretania. Juba held Mauretania, including Gaetulia, as a loyal client of Rome. His reign was noted for its intellectualism and for Juba’s reliance upon Rome to keep throne in the face of public unrest.