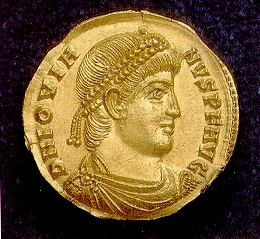 Flavius Jovianus was born in Singidunum (Belgrade) the son of Varronianus. Jovian rose through the ranks under Constantius II and later under Julian. Despite his Christian beliefs, Jovian rose within the court of Julian to be a man of his respect.

During an ill-fated expedition to Persia the death of Julian II, placed Jovian in a position where he was hailed as Emperor by the troops. His first job was to withdraw his troops from the dangerous position that they had found themselves in under Julian’s command. His troops exhausted, the continued attacks by Shapur II forced Jovian into a treaty under which parts of Armenia and Mesopotamia were given up to the Persians. With a humiliating peace concluded, Jovian finally arrived at Antioch where he immediately repealed Julian’s pagan policy and declared Christianity the official religion of the Empire.

Jovian then set out for Constantinople carrying Julian’s body back with him. Somewhere along the way, Jovian died. The cause of his death is not clear but it may have been from poisonous charcoal used to warm his tent. With the death of Jovian, the leading generals conferred among themselves and elected Valentinian I as Emperor despite the fact that Julian’s heir was intended to be a maternal relative named Procopius.