Cornelia Salonina Chrysogone was the wife of the Emperor Gallienus and the mother of Valerian II andSaloninus. She was married to Gallienus around 249 AD. Salonina is said to have been a virtuous and intellectual woman. Unfortunately, she was murdered with her husband in 268 AD at the siege of Milan. 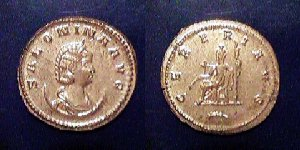 Note: The coinage of Gallienus, Salonina and their children reflect the serious economic dfficulties during this period. The high cost of defending the empire had taken its toll and there is no better record for that than the coinage of the empire itself. Both the gold and the silver coinage reflects the great difficulties during this period as hyper-inflation dominated the economy. The weight of the gold coinage varies so greatly, that at first glance it would appear as if there were no monetary standards whatsoever. The gold coinage is both irregular in size and weight. The range in weight for the gold coinage varies from as little as 2 grams to nearly 6 grams. It is clear that a double aureus was maintained, first being introduced by Caracalla briefly, and more formally by Trajan Decius (249-251 AD). However, specimens of the double aureus (as illustrated here) show a weight of 5.29 grams on average. This is slightly less in weight compared to the double aureus of Trebonianus Gallus at 5.67 grams. The aureus itself appears to have declined in weight fairly rapidly from 3.25 grams down to 2 grams. The wide variety in weights recorded by Roman Imperial Coinage reference, suggests that the decline in the monetary system was extremely rapid with perhaps the weight being reduced virtually monthly.

The silver antoninianus begins with a weight of about 3.5 grams. Within the first two years of his reign, the weight of this coinage declined below 3 grams. The silver coinage began to decline in weight steadily between 257-258 AD. By late 259 AD, the silver content itself began to declined dropping below 40% becoming a light chocolate bronze coin thinly coated with a silver wash. Ultimately, silver virtually disappeared completely between 262-268 AD under Gallienus and the antoninianus of this later stage had in fact been drastically reduced to the point that the coins were in fact mere bronze immitation thinly coated with a fine silver wash to keep up appearances (much like the withdraw of silver in modern times during the 1965-1968 period). Simultaneously, due to the fact that the once silver antoninianus had become debased to the point of a mere bronze coin itself, the traditional bronze denominations of the sestertius, dupondius and as ceased to be minted. The bronze was being used to coin the much more valuable antoninianus. 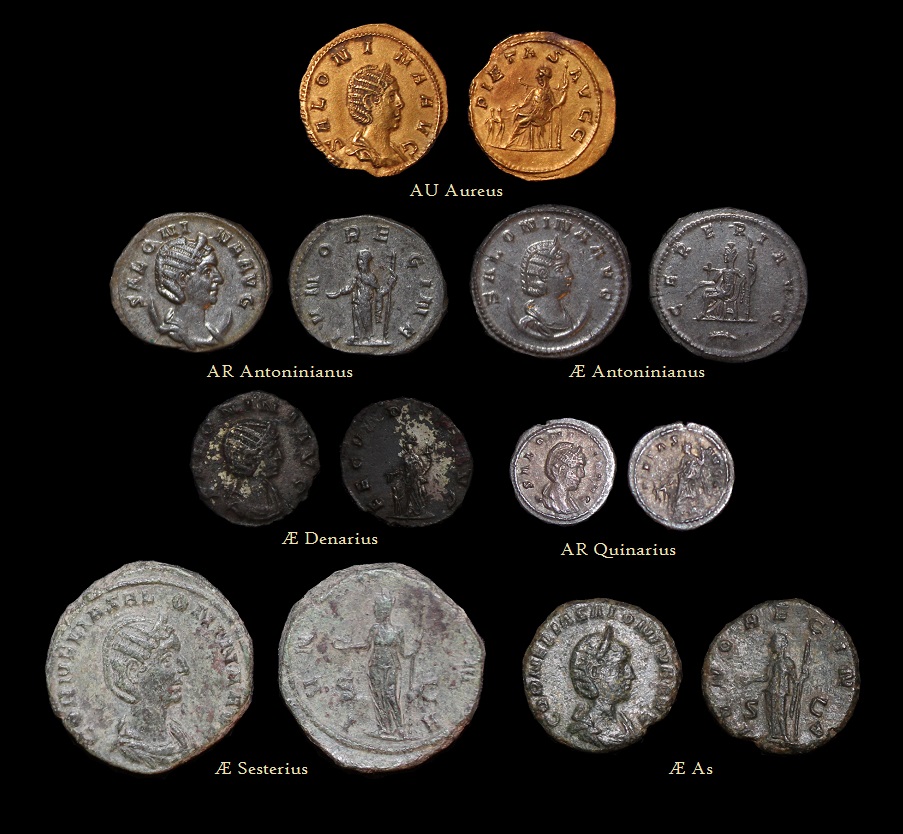 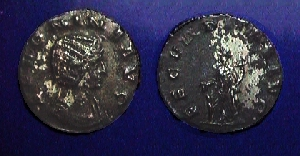 The denarius, while still issued, represented nearly token coinage. Its rarity today is a reflection of the extensive inflation of this period, which made this denomination unprofitable for issue.