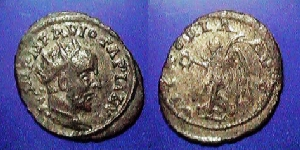 Marcus Fulvius Rufus Jotapianus was hailed Emperor by his troops in Syria when a revolt broke out in 248 AD. This rebellion appeared to be caused by high taxation imposed in Syria by Priscus who some claimed was Philip I’s brother. Julius Priscus, had been given the Governorship of Mesopotamia and he developed a reputation for being cruel and ruthless. His heavy extortion by taxation in the region led to the underlying unless in his province. Jotapian, who claimed to be a relative of Severus Alexander, thus took advantage of the situation and began his revolt in Commagene. The rebellion expanded to eventually cover both the provinces of Syria and Cappadocia, but the usurper was killed by his own men after a very brief reign. Even with the death of Jotapianus by his own men, the uprising continued into 249 AD.

Note: the silver content of these issues is very low even for this late period. Typical examples average between 48% and 54% silver thus yielding a very poor silver appearance which resembles more of a base white metal.