The Battle of Marathon and the Monetary System

The Persian invasion of the Greeks in Asia Minor, under which Lydia fell to King Cyrus, marked the beginning of the legendary struggle between the Greeks and the Persians. The Greek cities in Asia Minor finally revolted against the Persian dominance in 499 BC with aid from Athens. Despite this effort, the rebellion was defeated by the Persians again in 494 BC. Despite this apparent victory, it would be only a brief time before rebellion against the Persian presence would once again explode into the pages of history.

In 490 BC, King Darius of Persia embarked upon an ambitious conquest of mainland Greece. Darius assembled a huge naval force and pointed them in the direction of Athens funded a vast stockpile of gold darics. What followed changed history culminating in perhaps one of the most famous of all battles – the Battle of Marathon. It was this battle where a Greek was sent to Athens to bring the news of the invasion. To this day, we have the Marathon race in the Olympics in honor of this event. The Persians were defeated badly and they returned home after which King Darius died 5 years later. He was succeeded by his son Xerxes who vowed revenge upon Greece.

Xerxes launched a full-scale invasion of Greece once more in 480 BC. A large-scale army, supported by a naval fleet, crossed the Hellespont and marched through Thrace and Macedonia into mainland Greece. While the invading Persians vastly outnumbered the defending Greeks and victory seemed all but predestined, fate would have otherwise. As the story goes, the Persians were checked at the battled of Thermopylai where today a plaque marks the spot of the brave Spartans who fought gallantly to their death in defense of the mainland. This handful

of warriors who stood up against thousands, bought the time necessary to steal victory from the fist of Xerxes. The Persian fleet was eventually destroyed at the Battle of Salamis and in 479 BC; the Persian army was finally defeated at the Battle of Plataia. The Persians never again attempted to invade mainland Greece and the balance of power shifted from the old empire of Babylon to the new age of Greece.

Athens emerged as the dominant power among the Greek city-states. She had assumed a key role during the Persian invasion emerging as the city of both power and wealth in a similar manner as the United States following World War II. Athens capitalized upon this favored position and formed the “Confederacy of Delos” – an alliance of maritime city-states designed to free the Asia Minor from Persian control. In reality, this Confederacy developed into an Athenian Empire where member city-states paid tribute to Athens giving her untold wealth and power.

The Age of Perikles The First World Currency

Athens itself had a different monetary standard from that of the Greek Asia Minor city-states. Electrum (a natural gold/silver alloy) was not native to Greece but silver was. Therefore, the coinage of mainland Greece was predominantly based upon a silver standard quite different from that of Asia Minor where coinage first appeared in Lydia. 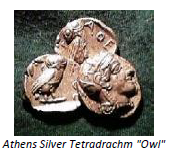 As the power of Athens grew in magnitude following the Persian defeat, we come to the first major restriction upon issuing monetary authorities. This was the great “Coinage Decree” authored by the designer of this new Athenian imperialism – Perikles. Essentially, Perikles restricted the Eastern Greek city-states under the control of Athens from issuing money. This decree came down during the year 449 BC and was designed to consolidate monetary policy at the seat of power in Athens much in the same manner as a central bank. For nearly 20 years, Greek city-states were subject to Athenian doctrine. The Athenian silver tetradrachm would become known simply as the OWL that emerged as perhaps the first attempt at creating a single world currency. This coin was so widely accepted internationally, that we find contemporary imitations being minted as far away as India

During this brief 20-year period, Athens achieved so much. The Age of Perikles gave humankind a richness in philosophy, rehtoric, government, art, literature and drama not to mention architecture, which still dominates most state buildings well into the modern era. The Parthenon was perhaps the crowning glory of this period and its construction was totally funded by vast quantities of the silver owls. We do find some extremely rare gold issues of Athens during this period. However, based upon their rarity, it is unlikely that they served as a regular part of the monetary system.

This Athenian dominance in monetary authority combined with demands for tribute (taxes) from cities within her new empire, led in part to a revolt known as the Peloponnesian War. Much of the tribute was spent on glorifying Athens rather than on building an empire. The Age of Perikles would last by the short lifetime of a single man. The consequences were delivered by the Peloponnesian War – a tax revolt against the domination of Athens that would bring to an end perhaps the most celebrated golden age of all time. The Peloponnesian War was touched off by an incident in the city of Plataia that quickly became a battle for Greek supremacy between the old rival enemies of Athens and Sparta. After 27 years of struggle and great expenditure, Athens, bankrupt, submitted in 404 BC to Sparta.

It is during this period that the coinage of Athens, once renowned for its standard and international acceptance, became a mere fiat currency – debased of nearly any silver content. The owls were reduced to bronze with a thin layer of silver plating. With her treasury depleted, the age of Perikles vanished into history along with one of the first attempts at creating a single world currency. Sparta was famous for his military skills but not its administrative skills. Sparta would prove less than worthy to be a great leader in affairs of state and economy. What followed in the aftermath of Sparta’s victory was a new age of turmoil and strife. Not only had the age of Perikles ended, it was perhaps the beginning of the end of southern Greek dominance in world affairs.

The Rise of Greek Art 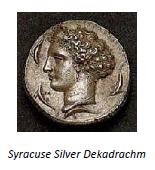 With the fall of Athens, Greek coinage was free to expand and experiment. The coinage of the Greek world explored with style and culture never seen again in the history of humankind. Cities competed for the best artists and the leader by far was Sicily. Syracuse became the dominant Greek city west of mainland Greece. The artists took such pride in their work they began to sign their names usually on the obverse dies. The above specimen is the signed work of Kimon. 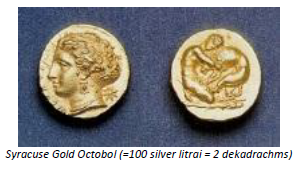 Gold coinage also begins to flurish during this period following the fall of Athens. Unlike the electrum issues of Asia Minor, a true bi-metal monetary system began to emerge with the gold coinage taking the form of extremely high purity. Larger silver denominations, such as the dekadrachm, start to become more common in areas like Sicily. Overall, the most commonly struck denomination became the tetradrachm (= 4 drachms) throughout most of the Greek World.

The Rise of Carthage

In the West, the Carthaginians had invaded Sicily attacking most of the Greek cities toward the end of the 5th century BC. Unlike the first invasion, which found the Carthaginians defeated by the hand of Gelon, the tyrant of Syracuse, this new invasion resulted in the partitioning of Sicily. The Greek Empire was weakened and the monetary system of the world highlighted these events.

Most of the bronze coinage of the late 4th century BC bears no marking as to its relative value to silver. The extent of inflation is therefore difficult to surmise. However, a late 4th-century bronze coin struck at the Italian Greek city of Metapontion bears a clear inscription as to its value – an obol. It would appear that a quarter of an ounce of bronze, which had been equivalent to 1/4 obol during the mid to late 5th century, had now become an obol itself. Therefore, the change in value within the monetary system of the world was considerable. Effectively, inflation appears to be no less than 400% following the age of Perikles.

This is the important point at this juncture in history. Bronze had fulfilled a need to supply the very lowest denominations within the monetary system of the Greek world during the 5th century. It circulated on a basis of faith rather than base metal value. Prior to its introduction, monetary authorities could not create money in terms of purchasing power beyond the pure metal value itself. However, the Bronze coinage within the Greek world at this time did in fact create money with a purchasing power well above the actual metal value. The increased use of bronze during the 4th century clearly illustrates that the monetary system of the Greek world was in fact inundated by this creation of money. This aided the inflation that inflicted the Greek Empire during this period and only increased its rate of decline by debasing its monetary system.