The Rise of Alexander the Great

The Greek world was now ripe for plunder. On its fringes, two great powers were emerging – that of Rome and Macedonia. Macedonia was the home of Philip II (359-336 BC). It was an area in Greece that occupies the northern most regions. In the Heroic days, the people of this region were often viewed as tribes or barbarians, more so than cultured southern Greeks. 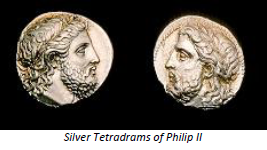 It was in the year of 357 BC when Philip II made his move. He invaded and captured Amphipolis which had been an Athenian colony near its valued silver mining region. It was nine years later, Philip II captured the capital of the Greek Chalkidian League – Olynthos. The forces of Thebes and Athens joined in an attempt to defeat this Macedonian. However, these two once great Greek powers were defeated by Philip at the battle of Chaeronea in the year 338 BC.

The monetary system under Philip II displayed all the signs of economic pressures due to conquest and the cost thereof. The silver tetradrachms, which had been struck at about 17 grams in Macedonia since the reign of Alexander I (498-454 BC), fell on average to 14.49 grams. This near 20% reduction in weight due to war would be an inflationary trend that always unfolds during periods of war as was the case with World War I and II in the 20th century.

Philip II was a man of powerful character and wisdom. The Greeks were uniting against the Persians once again in an attempt to realize the old Athenian goal of liberating Asia Minor. A meeting was held in Corinth where Philip II was elected to lead the Greeks in this great quest. Few could not acknowledge his power after defeating both Thebes and Athens. But resentment toward this northerner prevailed and in 336 B.C. an assassination plot was successful. Philip II was succeeded by his son who had been tutored by a great Athenian – Aristotle. His name would be remembered throughout all time perhaps more so than any of the heroes of whom Homer had written. This young man would restore glory to Greece like no other Greek before him. His name was Alexander the Great. 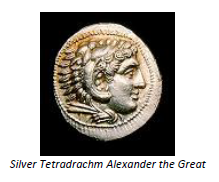 The story of Alexander the Great is a book in itself. It is sufficient to say that he conquered the Persian Empire and the world in hardly any time at all. His reign was only 13 years in total when he died in the city of Babylon during June of 323 BC as ruler of the known world even into India. Officially, Alexander was succeeded by his son Alexander IV and by Arrhidaeus who history has termed Alexander The Great’s idiot-brother also known as Philip III. The real power, however, rested in the hands of his former generals or advisors Antigonos, Antipater, Lysimachos, Perdikkas, Ptolemy and Seleukos. Some of these men went on to found great dynasties themselves such as Ptolemy who took Egypt among whose heirs was the famous Cleopatra. Both Alexander’s son and his brother met with violent deaths. 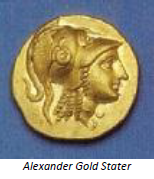 The monetary system under the new empire forged by Alexander saw a much greater use of gold. The bi-metallic monetary system introduced by the Persians, which first produced “refined” gold coinage rather than the natural alloy “electrum,” had become widespread throughout the Greek world. The coinage of Alexander once again standardized most of the western world and as such, we once again find the emergence of a world currency. The silver tetradrachm was restored in weight to 17.17 grams on average, up from 14.49 grams during his father reign. This weight would endure for more than 100 years. The gold stater, however, continued to be struck with an average weight of 8.55 grams, as was the case under Philip II. 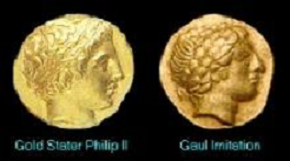 The coinage of Alexander and his father became so widely recognized that barbarous imitations began to appear once again on the outer fringes of the Greek world. Illustrated above are two staters. The one of the left is of genuine Greek origin. The one on the right is an imitation in fine gold struck by the Celtics in Gaul (modern France). This tendency to strike imitations (not counterfeit since the quality of the gold is equal in purity), demonstrates the importance of the Greek monetary system as it influenced regions even outside of their normal trading routes and contacts.

Following the death of Alexander the Great in June 323 BC at Babylon, his vast empire which stretched from Macedonia to India, became the object of a power struggle among his generals known as the Wars of the Diadochi.” The final resolution was the partitioning of Alexander’s Empire. While Alexander was “officially” succeeded by his infant son, Alexander IV and his idot brother Philip III, the generals were the true administrators and as such the successors. The Empire at first was partitioned among the six generals yet there was at least a superficial appearance of unity.

The generals of ALexander were Perdikkas, Antipater, Antigonos (the One-eyed), Ptolemy, Seleukos and Lysimachos. Both Philip III and Alexander IV were dead within 12 years of Alexander the Great’s death. Some of his generals did go one to found their own dynasties, Seleukos, Antigonos and of course, Ptolemy who ruled Egypt of whom a descendant would emerge as Cleopatra at the end of the Roman Republic.

Once Alexander’s vast empire divided, the political and economic pressures eventually forced further divisions. The Seleukid Empire, founded by Seleukos, was geographically the largest. By mid-3rd centiry BC, this Empire split into three as Baktria and Parthia won their independence. Parthia would continue to be one of the greatest enemies of Rome that was never quite conquered as it survived for nearly 500 years. This included much of the area from which the Persians had originally emerged. Egypt, founded by Ptolemy, would last more than 12 generations until it fell to Octavian following the battle of Actium and the suicides of Marc Antony and Cleopatra.

The original Macedonian Empire managed to survive until 197 BC when it fell to the next rising empire of Rome at the battle of Kynoskephalai under the rule of Philip V (221-179 BC). Macedonia lingered on for 30 years as a client state of Rome. It finally fell to the Romans under Philip V’s son, Perseus in 168 BC, when it was divided into four republics and eventually became a mere provice of Rome by 146 BC.

In 192 BC, Antiochos III the Great (223-187 BC) invaded Greece in an attempt to defeat the Roman by failed. He retreated back to Asia Minor but the Romans pursued. At the battle of Magnesia (Caria) in 190 BC, the Seleukid Empire fell to Rome and was reduced to only Syria losing all its Asia Minor possessions to Rome. Ptolemy chose to maintain friendly relations with the Romans that allowed Egypt to survive until 30 BC. 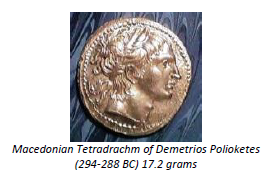 Throughout this period the silver tetradrachm remained the primary denomination minted throughout the Greek world. The mid-2nd century BC saw a new style tetradrachm with a wider flan, original introduced by Macedonia, adopted in most regions. Athens was one of the first to adopt this new style around 157 BC.

As Rome’s hold over the Greek world grew stronger, the Greek city-states were eventually deprived of all silver coinage rights. The money supply would come under Roman rule. The coinage of the Greek cities states under the Rome Empire would eventually be restricted to bronze denominations serving as a local municipal coinage system.

Bronze coinage once again began to increase in issue. This only reflected the growing inflationary trends within the remnants of Alexander’s empire. The new threat to the Greeks was now starting to mature. It was the Romans who would carve out an empire that would one day dwarf that of the Greeks and Persians combined in both scope and longevity.