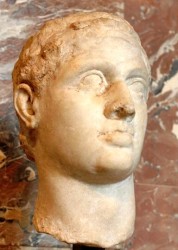 Ptolemy XIII was the son of Pharaoh Ptolemy XII succeeding his father in the spring of 51 BC as co-ruler of Egypt by his marriage to his older sister Cleopatra VII of Egypt (69–30 BC). The eunuch Pothinus acted as regent for Ptolemy XIII who was very ambitious and did not like to share any power with Cleopatra VII. Pothinus attempted to depose Cleopatra VII since she began to issue coins with her own image rather that the traditional Ptolemy I portraiture. Ptolemy XIII’s name was omitted on official documents and coins.
Ptolemy XIII and Pothinus managed to force Cleopatra to flee to Syria, where she raised her own army and a civil war began in Egypt. Soon their other sister started to claim the throne as Arsinoe IV of Egypt (r. 48-47 BC), which only further complicated everything. Pompey the Great fled to Egypt seeking refuge after his defeat by Julius Caesar. Ptolemy XIII and Pothinus pretended to shelter Pompey, however, on September 29th, 48 BC, they murdered Pompey thinking this would appease Caesar to strengthen their position against Cleopatra VII. They presented Caesar with Pompey’s head. He was not pleased. Caesar ordered that Pompey’s body be located and given a proper Roman funeral.

Cleopatra VII proved more successful in winning Caesar’s favor and became his lover. Caesar arranged the execution of Pothinus and the official return to the throne of Cleopatra VII. Still determined to depose Cleopatra VII, Ptolemy XIII allied himself with his sister Arsinoe IV. Together they assembled an army to depose Cleopatra VII. Caesar had a small contingent of men and Ptolemy XIII thought he could defeat Caesar in December 48 BC when he laid siege to Alexandria itself. This is when it is said that the great Library of Alexandria was destroyed by fire.
Caesar was no fool. He had Roman reinforcements on their way all along. The Battle of the Nile (47 BC) then took place and Caesar defeated Ptolemy XIII who then fled the city. Ptolemy XIII reportedly drowned on January 13, 47 BC while attempting to cross the Nile. Cleopatra VII became the unchallenged ruler of Egypt, and named her younger brother Ptolemy XIV of Egypt (40 BC) her new husband/co-ruler.

Note: There is no known coinage of Ptolemy XIII displaying his name.