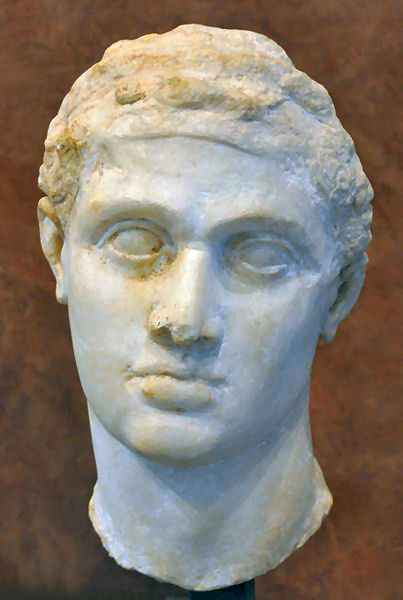 Ptolemy XII was probably a son of Ptolemy IX by Cleopatra IV. His reign as king was interrupted by a general rebellion that resulted in his exile from 58 to 55 BC in Rome. Therefore, Ptolemy XII ruled Egypt between 80 and 58 BC and then again from 55 BC until his death in 51 BC. Ptolemy XII was not considered to be a very worthwhile ruler and more interested in personal pleasure.

In 80 BC, there was an uprising whereby Ptolemy XI was removed by the people from the throne after he had killed his coregent and step mother Berenice III. When Ptolemy XI died without a male heir, the only available male descendents of the Ptolemy I line were the illegitimate sons of Ptolemy IX by an unknown Greek concubine or Ptolemy XII who may have actually been a son of Ptolemy IX, which seems more plausible. Ptolemy XII was living in exile at the court of Mithridates VI, King of Pontus. Ptolemy XII was proclaimed king as Ptolemy XII Neos Dionysos and then married his sister, Tryphaena, as with the tradition of the House of Ptolemy.

However, Ptolemy XI had left the throne to Rome in his will, therefore Ptolemy XII was not the legitimate successor according to that tradition. This would later set the stage for Julius Caesar intervening on behalf of Cleopatra VII. Yet, at that time, Rome did not challenge Ptolemy XII’s succession because the Senate was unwilling to acquire an Egyptian expansion at that point in history.

Ptolemy XII adopted a pro-Roman policy. In 63 BC, it appeared that Pompey would emerge as the leader of a Roman struggle, thus Ptolemy sought to form a patron-client relationship with Pompey by sending him monetary support.  Pompey accepted the money but refused the invitation travel to Alexandria. Ptolemy XII soon afterwards traveled to Rome to support his possession of the throne. After paying a bribe of six thousand talents to Julius Caesar and Pompey, a formal alliance was formed and his name was inscribed into the list of friends and allies of the people of Rome.

In 58 BC, Ptolemy XII did nothing when Rome conquered Cyprus, a territory ruled by his brother and a possession of Egypt. This led to a rebellion in Alexandria when this became the last straw since the core issue was excessive taxation. Egyptians were in fact paying taxes to buy Roman favor for Ptolemy XII. Ptolemy XII was forced to flee to Rome taking his daughter Cleopatra VII. His daughter Berenice IV became his successor. She ruled as coregent with her sister or mother Cleopatra VI Tryphaena. However, about one year after Ptolemy XII’s exile, Cleopatra VI Tryphaena died and Berenice then ruled alone from 57 to 56BC.
Ptolemy XII lived in Rome at Pompey’s estate. Roman bankers came to realize that they would not get the return on their loans to the Egyptian king unless he was restored to the throne. Therefore, the bankers in 57 BC applied political pressure and forced the Senate’s decision to restore Ptolemy or find their own credit lines cut to bribe elections. Still, the Senate of Rome did not wish to invade Egypt to restore the king for the omens forewarned  that is Rome proceeded with military intervention, great dangers and difficulties would occur. Ironically, this would come true but it would result in civil war and the end of the Republic.
Cassius Dio reported that a group of one hundred men were sent as envoys from Egypt to make their case to the Romans against Ptolemy XII’s restoration. Ptolemy had their leader poisoned and most of the other protesters killed before they ever reached Rome. Ptolemy XII finally recovered his throne by paying Aulus Gabinius 10,000 talents to invade Egypt in 55 BC. After defeating the frontier forces of the Egyptian kingdom, Aulus Gabinius’s army proceeded to attack the palace guards but the guards surrendered before a battle commenced. Ptolemy XII’s restoration followed in early 55BC. Nevertheless, upon entering the palace, Ptolemy had Berenice and her supporters executed. From then on, he reigned until he died in 51 BC. Around two thousand Roman soldiers and mercenaries, the so-called Gabiniani, were stationed in Alexandria to ensure Ptolemy XII’s authority on the throne. In exchange, Rome was able to exert its power over the restored king. His daughter Cleopatra VII became his coregent.

Upon Ptolemy XII’s restoration of the throne, the Roman bankers demanded repayment. This only led to more tax increases. Ptolemy XII had to imprison Rabirius the tax collector to protect his own life from another tax rebellion which at least allowed him to escape back to Rome in 54 BC. The bankers accused him of defaulting and he was defended by Cicero. Ptolemy then had also begun debasing the coinage as an attempt to repay the loans which created a currency crisis as the value of Egyptian currency collapsed by more than 50%.

Prior to his death, Ptolemy XII chose his loyal daughter Cleopatra VII declaring that she and her brother Ptolemy XIII should rule the kingdom together. To safeguard his interests, he made the people of Rome executors of his will. Since the Senate was busy with its own affairs, Pompey then personally approved the will. 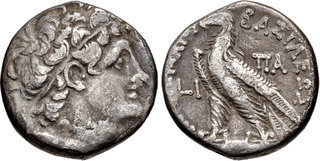