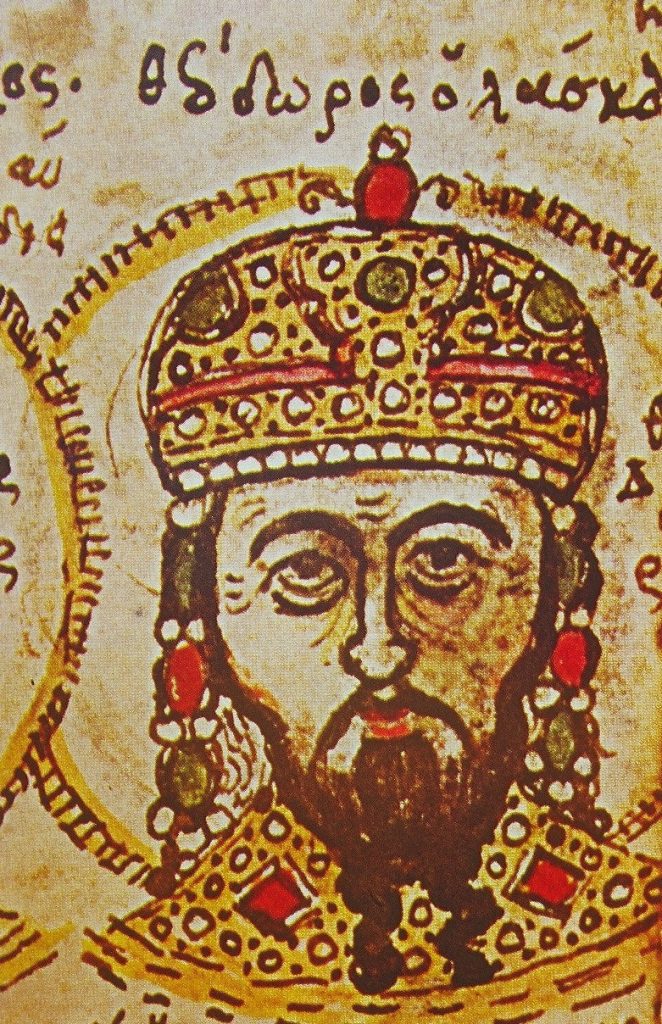 Theodore I Comnenus-Lascaris (1208-1222) was the first Emperor of Nicaea, which was to the south of Constantinople in modern-day Turkey. Theodore was born in ca. 1174, to the Laskaris, a noble Byzantine family of Constantinople. He was the son of Manuel Laskaris (b. c. 1140) and wife Ioanna Karatzaina (b. c. 1148). He had four older brothers, one of whom was an Emperor briefly between 1204 and 1205 – Constantine Laskaris (died after March 19, 1205). He also has two younger brothers. Theodore fought in the two sieges of Constantinople by the Latins during the Fourth Crusade (1203–1204). He remained in Constantinople until the Latins actually penetrated into the city, at which point he fled across Bosphorus together with his wife. At about the same time his brother Constantine Laskaris was unsuccessfully proclaimed emperor by some of the defenders of Constantinople. In Bithynia, Theodore established himself in Nicaea, which became the chief rallying-point for Byzantine survivors.

Initially, Theodore did not claim the imperial title. In addition, his own control over the Anatolian domains of the Byzantine Empire was challenged, by David Komnenos in Paphlagonia and Manuel Maurozomes in Phrygia. It was only after defeating the latter two in 1205 that he was proclaimed Emperor and invited Patriarch John X Kamateros to Nicaea. But John died in 1206 before crowning Theodore. Theodore appointed Michael IV Autoreianos as the new Patriarch and was crowned by him in March 1208.

Theodore was defeated by the Latins at Adramyttion, but later the Latins were by the Bulgarians at the Battle of Adrianople. Theodore assumed that his enemy’s enemy was his friend so he entered into an alliance with Kaloyan of Bulgaria and took the offensive in 1209. In 1214 Theodore concluded a peace treaty with the Latin Empire at Nymphaion, and in 1219 he married Marie de Courtenay, a niece of now deceased Emperor Henry. Theodore broke the treaty and attacked the Latin Empire again in 1220, but peace was restored. Theodore died in November 1221 and was succeeded by his son-in-law John III Doukas Vatatzes. He was buried in the Monastery of Hyakinthos in Nicaea. 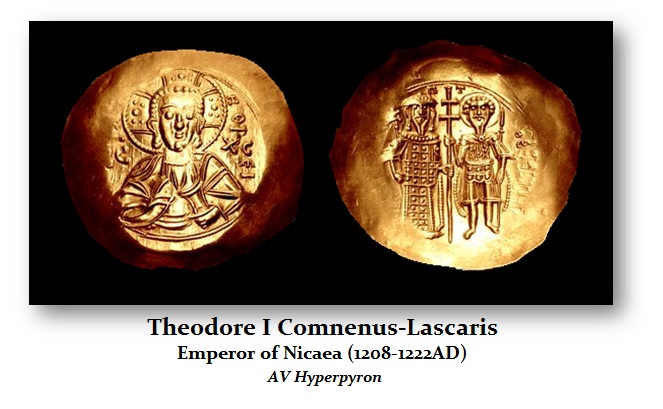 The coinage of Theodore I has been rare and in fact only two gold hyperpyrons are known to have survived. The first hyperpyron attributed to Theodore was published by Jordanov in 1989 (see reference above). Now, nearly 30 years later, a second example, sharing the same dies, has come to light. Both coins depict the emperor with a forked beard, and the only emperors in this period with a forked beard are Andronicus I, Theodore I, John III, and Michael VIII. The military saint on the reverse is St. Theodore, identified likewise by his forked beard as well as the legend. He is the patron saint of Theodore I, and the form of this reverse is exactly the same as that of the first type of billon trachea of Theodore I (DOC IV, pl. XXVII, 5) which has the seated Virgin as the obverse. The bust of Christ on the present coin might indicate the superior denomination.