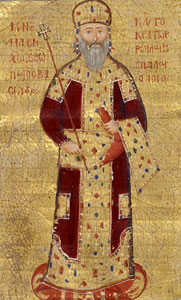 Manuel II Palaeologus (1391-1425AD)  ruled what was left of the Byzantine Empire as it was entering its final phase near the closing decade of the 14th century. The Byzantine empire was a dying state. Upon the formal coronation of Manuel II in 1392, the downfall of the empire at hands of the Turks seemed imminent. Manuel was a diligent ruler and this allowed the empire to survive even with a dwindling military and financial resources that were imploding which prevented him from capitalizing on the important military defeat of Bayezid at Ankara in 1402.

Manuel spent nearly four years during his reign traveling to Europe in search of aid for his cause to save the last vestiges of the Roman Empire. He left his nephew, John VII, in charge of Constantinople as his regent from 1399-1403. Upon his return to the capital, Manuel made John ‘King of All Thessaly’ but his declining health led to his death in 1408. Manuel himself began to decline in health in his seventies and he then raised his eldest son, John VIII, to the throne as his co-emperor in 1421. The following year, Manuel suffered a stroke and was forced to relinquish his rule and died finally in 1425.

A series of misfortunes and miscalculations led to the loss of Thessalonica to the Turks and the coinage struck there came to an end. Nonetheless, Manuel II had been successful in at least keeping the empire fledgling for roughly another 60 years. 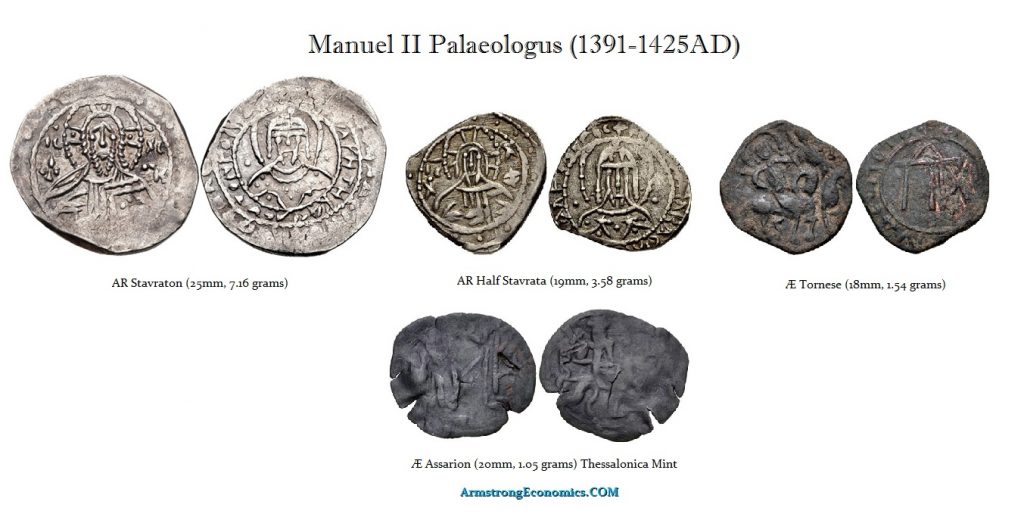 Manuel was compelled to engage in a monetary reform around 1394/1395 as the resources of Byzantium declined. There were no gold coins struck at this time and the coinage was simply silver and bronze. The last partially gold debased coinage ended with the reign of John VI Cantacuzenus during his joint reign with John V (1347-1353AD). These changes carried out by Manuel II included a reduction in weight of the Stavraton (along with its respective fractions), as well as a coordination of the main design elements which were to remain virtually unchanged throughout the remainder of the empire. Additionally, he increased the output of the Half Stavrata so that they would vie with the full Stavrata themselves for the primary silver coin circulating in the empire. This system was left unchanged during the brief regency of John VII and was continued, though obviously in smaller numbers and in increasingly cruder style, under the reigns of John VIII and Constantine XI.