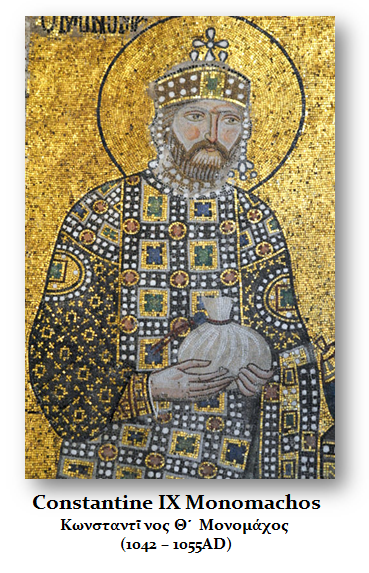 Constantine IX Monomachos (c. 1004–1055), reigned as Byzantine Emperor from June 1042 until January 1055 when he died. Constantine IX was chosen by Empress Zoë Porphyrogenita who was the daughter of Constantine VIII. Zoe chose Constantine IX as her husband and co-emperor in 1042, although she had been exiled for conspiring against her previous husband, Emperor Michael IV the Paphlagonian. They ruled together until Zoë died in 1050, and then he ruled with Theodora Porphyrogenita until 1055.

Constantine IX is said to have enjoyed the good life and spent much of the public treasury supporting art and culture. In 1045, he created a university in Constantinople. His military affairs were undermined by the decline in the ancient system that men of the property served in the army for it was believed they had something to defend. But private farmer ownership was diminishing and large tracks of land were being consolidated in the hands of rich aristocrats for profit given that agriculture was about 80% of GDP at the time. 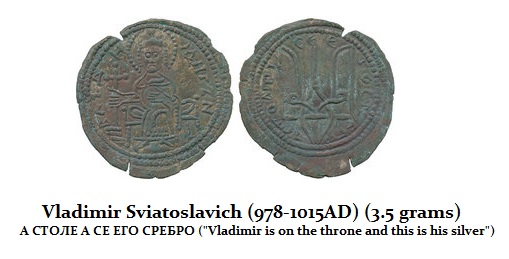 Nevertheless, during Constantine’s reign, he led the Byzantine Empire into wars against groups which included the Kievan Rus in what today is Ukraine. He also moved against the Pechenegs and in the East against the rising Seljuq Turks who would eventually conquer Byzantium about 400 years later.

Constantine defended the borders of Byzantium and they largely remained intact following the conquests of Basil II (976-1025). Yet, Constantine did expand the border eastwards, annexing the wealthy Armenian kingdom of Ani. Some draw the line here as the last effective ruler of Byzantium despite the reduction in the treasury. 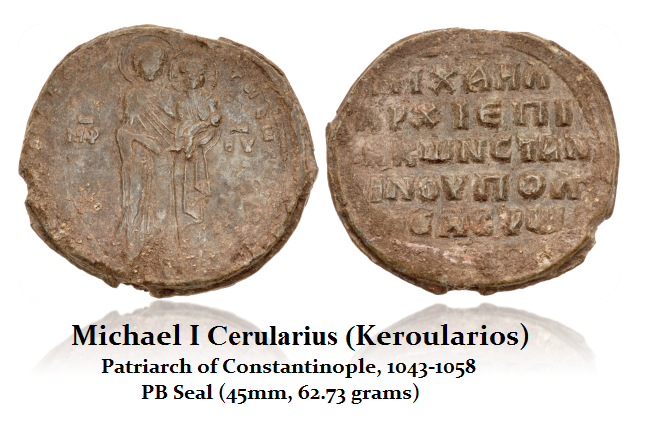 The Great Schism took place during the end of his reign in 1054 which broke the Church into Eastern Orthodox and Roman Catholic. Then Pope Leo IX excommunicated the Patriarch Michael I Cerularius (Keroularios) who countered by himself excommunicating the Roman legates. Some record that Constantine tried to intervene but his attempts to prevent it had been futile.

Much of the Great Schism was really based upon politics. Yes, most will write about the question of episcopal authority in the Church being acute. However, it truly boils down to the fact that Rome had been the capital of Rome where Peter was crucified. Constantine I The Great moved the capital city to Byzantium and it took his name – Constantinople. The Patriarch of Constantinople was thus near the political power and Rome was gradually declining into an unimportant possession of the old world. The Pope in Rome claimed universal jurisdiction over Christianity and the tension escalated where the Patriarch saw this as really unacceptable.

Patriarch Cerularius was actually educated for the civil service – not for an ecclesiastical career. Nevertheless, he desired political power and lobbied to be named patriarch in 1043 by Constantine IX. Cerularius’ ambitious desires for political power drove him into a confrontation with the Pope in Rome. He held an uncompromising belief in the autonomy of the Eastern Church. Because of this, Cerularius obstructed Constantine’s attempts to ally the Byzantine and Roman empires in defense against the Normans.

Cerularius saw an attack upon his power for in 1052, Constantine IX made concessions to Pope Leo IX, and Cerularius, seeking to thrust his political power, decided to force the Latin churches in his diocese to use the Greek language and liturgical practices; when they refused to do so, he ordered them closed. This was the source of the Great Schism more so than the differences in belief which appear to have been exaggerated to serve as political justification for Cerularius. Hence, this was more about the power within Christianity for that of state moved to Constantinople. Thus, Cerularius was not a man of religion but a politician seeking power. Consequently, he took the position that the seat of power in the Church should be the same as that of the State in Constantinople resulting in the relative standings of Rome and Constantinople and the recurrent source of tension ever since 1054AD. 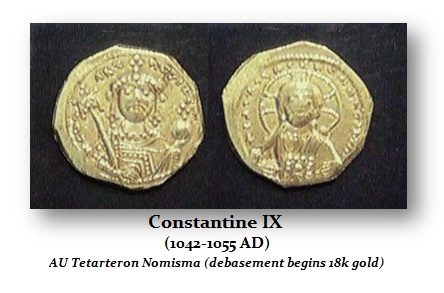