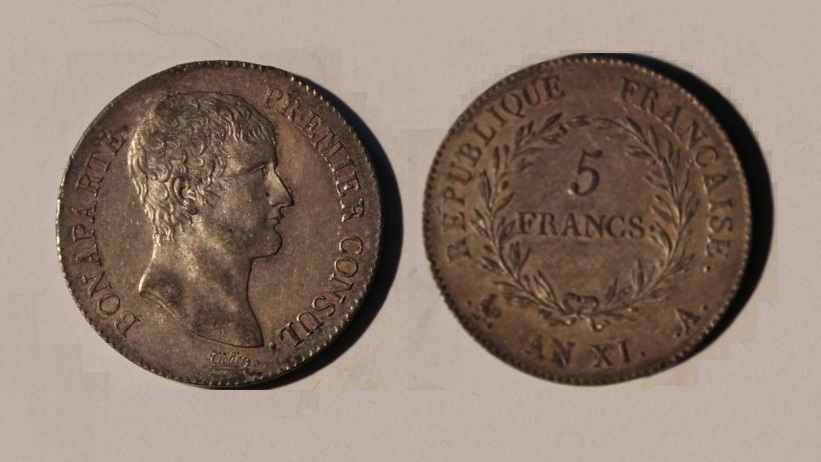 During April 1795, in the 3rd year of the French Republic, the National Assembly created a new currency. From now on, the franc was to be the standard coin in France. The franc was one of the most modern currencies of the time, for it was divided decimally: 1 franc was equal to 10 decimes and 100 centimes. Besides, it was to contain 4.5 grams of fine silver, and weigh 5 grams altogether.

For the time being, no 1-franc-pieces were issued, however. The only coins of the new decimal currency that were emitted were 5-franc-pieces, dating from the years 4 to 11 of the revolutionary calendar (1795-1803). Besides some copper and bronze coins worth 5 centimes and 1 décime were struck, but people refused to accept them. They were too light, and had to be replaced by heavier coins.

The preponderant mass of circulating coins in France, even after the monetary reform of 1795, thus dated from royal times. The old coins could not be replaced from one day to the other; it took decades to actually implement the reform. The royal gold coins were demonetized in 1829, the silver ones in 1834, and the copper and bronze coins were at long length confiscated and exchanged in the 1850s.

For lack of silver the first 1 franc-piece was minted only in the 11th year of the revolutionary calendar (September 1802-September 1803), after the First Consul of France, Napoleon Bonaparte, and his revolutionary armies had raised the necessary financial means by plundering several European countries. The obverse of the first franc of the Republic of France accordingly depicted the bust of Napoleon.