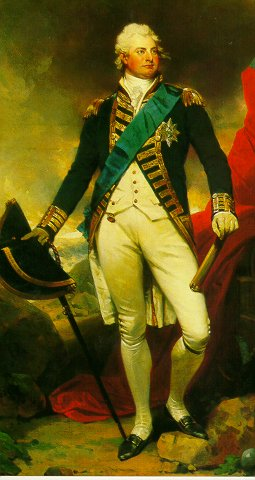 King of England, known before his accession to the throne as William Henry, Duke of Clarence, was the third son of George III., and was born August 21, 1765. At fourteen years of age he entered the navy as a midshipman on board the Prince George, a 98-gun ship, commanded by Admiral Digby; and he was placed on the same footing, in every respect, with other youths of the same rank in the service. Prince William Henry was present with Admiral Rodney at the capture of the Caraccas fleet, commanded by Don Juan Langara. The Prince served nearly all the residue of his time as a midshipman in the West Indies, and off the coasts of Nova Scotia and Canada; and many characteristic anecdotes, honourable to his bravery and humanity are related of him during the period of his naval career. He was afterwards removed to the Warwick, of 50 guns, commanded by Lord Keith, and was present when that officer captured the frigates L’Aigle and La Sophie, and the Terror sloop-of-war, off the Delaware, in 1782. He then joined Lord Hood, who was in quest of the French fleet under De Grasse and Vaudreuil, and on board the Barfleur first became acquainted with Nelson, then in command of the Albemarle.

In June, 1783, Lord Hood’s squadron returned to England ; and in the summer of 1785 the Prince was appointed third lieutenant of the Hebe frigate. In 1786, as captain of the Pegasus, of 28 guns, he sailed for Nova Scotia; whence he proceeded to the Leeward Islands station, and remained for some months under the orders of Nelson, when a strong and lasting friendship (honourable to both) sprang up between them. In December, 1787, the Prince returned to England, and was appointed to command the Andromeda frigate, in which he again sailed for the West Indies. In 1789 he was created Duke of Clarence and Earl of Munster, in Ireland, took his seat in the House of Lords, and was made rear-admiral of the Blue in 1790. From this time, however, he saw no more active service afloat.

In 1811 he succeeded Sir Peter Parker as admiral of the fleet. In that capacity he hoisted his flag for the last time, for the purpose of escorting Louis XVIII. to France; and on board the Impregnable he received the Emperor of Russia and the King of Prussia. For many years the Duke led the life of a private English gentleman, residing at Bushy Park, of which he had been appointed ranger on the death of the Countess of Guilford in 1797.After the death of the Princess Charlotte of Wales in 1817, a new era opened in the position and prospects of the Duke of Clarence, and on July 11, 1818 he married the Princess Adelaide, eldest daughter of the Duke of Saxe Meiningen. Two daughters, the eldest of whom died on the day of her birth, and the youngest when only three months old, were their only offspring. Having become heir – presumptive to the throne in 1827 by the death of the Duke of York he received an additional parliamentary grant which raised his income to £40.000 a year. He was also appointed Lord High Admiral of England, -a post revived for the occasion, but owing to some objections made by the Duke of Wellington to the expense of his royal highness’s progresses, he resigned the office. On June26 1830, the Duke of Clarence succeeded his brother George IV as King of England and was crowned, with his royal consort in Westminster Abbey, September 8, 1831.

A marked difference was soon observable in the conduct of William IV. and his predecessor. The secluded habits and fastidious retirement that had distinguished the last years of his brother’s life, gave place to an obvious desire of popularity on the part of the new monarch; while the Wellington administration was succeeded by that of Earl Grey, under whom the long desired reformation of parliament was effected. Political animosities were at their height; but still the king was on the popular side, and the court offered, in every respect an example worthy of imitation. In May, 1837 his Majesty was taken ill and in four weeks from that time, June 29, 1837 he died. –‘A man,’ said Lord Grey, more sincerely devoted to the interests of his country, and better understanding what was necessary for the attainment of that object there never did exist; and if ever there it was a sovereign entitled to the character, his Majesty may truly be styled a PATRIOT King.