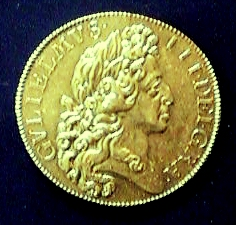 King of England, was the son of William II. Prince of Orange, by his wife Mary, daughter of Charles I., and was born at the Hague, November 4th, 1650. His father, stadtholder of the United Provinces, died a few days before his birth; and through the influence of the Republican party he was long excluded from that office; his exclusion being demanded also by Cromwell on the conclusion of the treaty with Holland in 1654. But in 1672 the serious peril of the Republic from the aggressions of Louis XIV. led to the annulment of the edict by which the stadtholderate had been abolished, the De Witts were imprisoned and massacred, and William of Nassau was installed in the office of stadtholder.

Though only 22 years of age, he showed himself the worthy descendant of William the Silent, founder of the Republic; and in two campaigns drove the French out of the Dutch territory. He was defeated by the Prince of Condé at Senet and the war lasted till 1678. In the previous year William had married Mary, daughter of James, Duke of York, afterwards James II., and this alliance gave him far greater importance as head of the league subsequently formed against France, and as leader of the Protestants of Europe. When the arbitrary measures of James II. became intolerable to his subjects, the hopes of the leading friends of freedom and Protestantism naturally turned to William, and he accepted the call sent him, to come and save their rights and liberties. He landed at Torbay, 5th Nov., 1688; the king fled, but was caught and brought back; William arrived in London in December; and by the Convention, assembled in January, 1689, the crown was offered to William and Mary, and was accepted by them.

They were crowned, 11th April, by Compton, bishop of London, and the sermon was preached by Bishop Burnet. The primate Sancroft and seven of the bishops refusing to take the oaths to the new government, were suspended from their office, and Sancroft with five of the bishops (all who then survived) were subsequently deprived. Some of the clergy followed the example of the prelates and with them are known as the party of the Nonjurors. Resistance was made in Scotland but ended with the defeat of Dundee at Killiecrankie while a more serious conflict raged in Ireland in which James II. and William personally took part, and which was closed by the victory of the latter at the battle of the Boyne. The principal aim of the king thenceforth was to humble France, and he spent much of his time abroad, engaged as leader of the army of the confederates. He took Namur, but was defeated by the French at Steenkirk, and Neerwinden (Landen), and in 1697 was recognized by the Peace of Ryswick as King of England.

Three years before he had lost his queen -a great personal sorrow; but the throne was secured to him by the provisions of the Bill of Rights. He was, however, very unpopular with his subjects, and hostile intrigues, conspiracies, and projects of assassination troubled his reign. Whigs, Tories, and Jacobites alike distrusted him. He continued to take an active part in the affairs of Europe, and especially in the negotiation of the famous Partition Treaties for the disposal of the dominions of the Spanish king. He was provoked to prepare a new war against France by the recognition by Louis XIV. of the son of James II. as king, but this project was set aside by his death.

The reign of William III. forms one of the great epochs of our Constitutional History, -the Revolution the main feature of which is the final recognition by law of those great principles of regulated liberty for which the statesmen and heroes of the Commonwealth had contended. The character of William has been both extravagantly lauded and passionately depricated. His taciturn cold manner, his preference of his foreign friends and the way in which he stood aloof from both the political parties naturally excited prejudice and ill will against him. But it is not possible to doubt his great intellectual and moral qualities, clear sightedness, courage (often to rashness in the field) decisiveness and indomitable energy, and persistency of purpose. One dark stain on his character is ineffaceable, he distinctly sanctioned the atrocious massacre of Glencoe, devised by the master of Stair. William III. died at Kensington Palace, in consequence of a fall from his horse, 8th March, 1702, and was buried in Westminster Abbey.