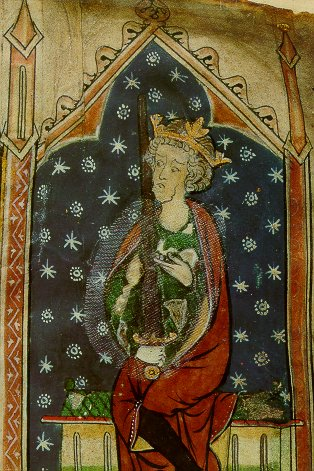 Henry I., King of England, surnamed, on account of his superior education, Beauclerc, was the youngest son ofWilliam the Conqueror, and was born at Selby, in Yorkshire, in 1068. Jealousies and dissensions early broke out between him and his elder brothers, Robert and William (Rufus), and on the sudden mysterious death of William in the New Forest, in 1100, Henry, who was hunting with him, immediately seized the crown and the public treasures, his brother Robert being not yet returned from the crusade. To strengthen his hold on the affections of his subjects, he granted a charter re-establishing the laws of the Confessor, abolished the curfew, professed a reform in his own character and manners and married the Princess Maud, daughter of Malcolm, King of Scotland, and niece of Prince Edgar Atheling, thus uniting the Norman and Saxon races. When Robert invaded England in 1101, war was prevented by negotiation and the grant to Robert of a pension of 3000 marks. The same year began the quarrel between the King and Anselm, Archbishop of Canterbury, respecting investitures.

Henry, ambitious of the crown of Normandy, invaded that country in 1105, and took Caen, Bayeux, and several other places. He completed the conquest in the following year by the defeat and capture of Robert at the battle of Tenchebrai. In 1109 the Princess Matilda (Maud) was betrothed to the Emperor Henry V., but in consequence of her youth, the marriage was deferred for several years. Troubles in Normandy and in Wales, and war with the King of France, occupied Henry in the next few years. In 1118 he lost his Queen, Maud, and two years later his only legitimate son, the Prince William, who, with his retinue, perished by shipwreck, on the passage from Normandy to England. It is said that the King was never seen to smile again. In 1121 he married Adelais, or Alice, daughter of Geoffrey, Duke of Louvain, and on the failure of his hope of offspring, he had his daughter, the Empress Matilda, then a widow, acknowledged heiress to the throne. Henry died at Rouen, from the effects of gluttony, December 1, 1135, having been absent from England nearly two years and a half. His wishes for his daugther to succeeded him merely caused a civil war between Matilda and the usurper Stephen.

NOTE: Henry I did introduce a half-penny. This issue is very rare and thus indicative of its small issue. This denomination did not survive his own reign and was only reintroduced much later by Henry III.