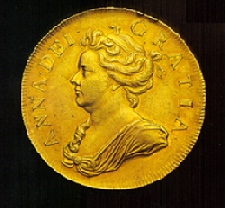 Anne was the second daughter of James II, by his first wife, Anne Hyde, was born in 1664; was married to Prince George of Denmark in 1683; and succeeded to the crown on the death of William III, 1702. Her reign is marked by the great war of the Spanish Succession and the achievements of Marlborough, the accomplishment of the legislative union of Scotland with England, and the dashing exploits of lord Peterborough in Spain. Anne was of a kind and yielding disposition, and was long entirely controlled, first by the imperious duchess of Marlborough, to whom she became warmly attached in childhood, and afterwards by her attendant, Mrs. Masham. Prince George died in 1708, and their six children died young. The contention of parties during the reign of Anne was extremely violent, in consequence of the hopes entertained by the Jacobites that she would be induced by natural feelings to favour the succession of her brother, the Pretender. Her reign was also distinguished for the number of eminent writers who then flourished, several of whom rose to high stations. Died, 1714, aged 50.