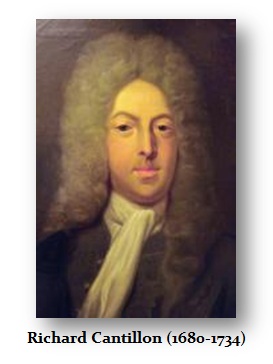 Richard Cantillon was an Irish international banker. Thanks to the financial backing of Brydges and Decker, Cantillon became an established banker. He was a man of great intellect, was well traveled, and spoke several languages. He knew people such as Montesquieu and Voltaire. His travels gave him contacts through which Cantillon was able to specialize in money transfers between Paris and London. Cantillon found fault in the mercantilists’ contention that the wealth of a country was determined by the amount of gold or money it possessed. Cantillon argued that money can only be a measure of wealth while wealth itself is actually derived from production. Cantillon saw money as simply the mediumj of exchange and not wealth itself.  He believed that only agriculture yielded a surplus, and to this extent he anticipated the Physiocrats. His view of ‘pure rent,’ and the circulation of wealth may also have influenced the Physiocrats.

Indeed, Cantillon’s Essai sur la Nature du Commerce en Général (Essay on the Nature of Trade in General) written in 1730, was a book considered by William Jevons to be the “cradle of political economy”. Cantillon indeed influenced Adam Smith, and breathed life into the Physiocrats. He also influenced Turgot and Jean-Baptiste Say. The Essai’s lack of notoriety is interesting since it is one of the few referenced in Adam Smith’s Wealth of Nations.

Cantillon was a speculator in, and helped fund, John Law‘s Mississippi Bubble experiment, from which he acquired great wealth. However, his success came at a cost to his debtors, who pursued him with lawsuits, criminal charges, and even murder plots until his death in 1734. Nevertheless, what is certain is that both Cantillon and John Law were influenced by an even earlier researcher who remains almost invisible to the history of economic thought – William Potter who wrote an essay in 1650 entitled the “The Key of Wealth” arguing that in effect the key was the velocity of money.