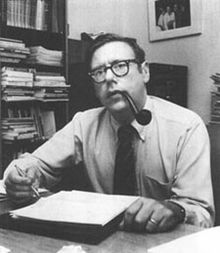 Arthur Okun was an American economist. Okun taught at Yale University before moving to Washington in 1961. He acted in various capacities to successive administrations, becoming chairman of the President’s Council of Economic Advisers in 1968. His name is associated with the ‘law’ propounded in his 1962 paper, Potential GNP, its Measurement and Significance. Okun’s Law states that to avoid the waste of unemployment an economy must continually expand and relates changes in unemployment to changes in national product.