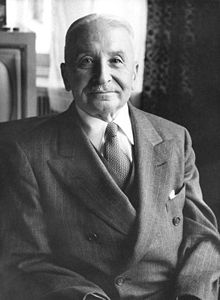 Ludwig von Mises was an Austrian-born economist. Taught at the University of Vienna until the Nazis came to power. He became a naturalized US citizen in 1946 and taught at New York University from 1945 until his retirement in 1969. Mises did some important early work in monetary theory, but is best known for his criticism of socialist planning and his hostile attitude to government intervention in the economy. His greatest work, Human Action published in 1949, covers the entire spectrum of economics.