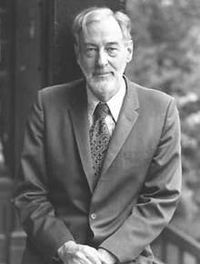 Tjalling C. Koopmans was a Dutch-born economist and econometrician who became a naturalized American in 1946. Koopman studied mathematics and physics at the University of Utrecht before gaining an economics doctorate from Leiden in 1936. In 1940 he went to Princeton University in America as a researcher. During the war, together with the mathematician George Dantzig, he developed the theory of linear porgramming. At the same time, Kantorovich in Russia was independently formulating the same theory. In 1975 Koopmans and Kantorovich shared the Nobel Prize for Economics for their contributions to the theory of optimum allocation of resources; Koopmans has in particular helped to develop the discipline of econometrics. Most of his work has been in this area where economic theory, mathematics and statistics are combined together to permit understanding of the quantitative relationships between economic variables.