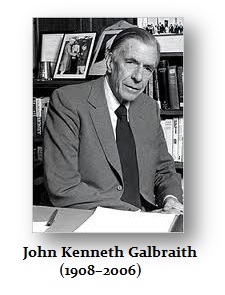 John Kenneth Galbraith was a Canadian economist who moved to the United States where he taught at Harvard. Gaibraith’s books are often to be found in the best-seller lists. His most important works are A Theory of Price Control (1952), American Capitalism (1952), The Affluent Society (1958), The New Industrial State (1967) and Economics and the Public Purpose (1974). Gaibraith is characterized by his critical attitude towards conventional economics. He believes that many assumptions upon which economists reason are no more than ‘conventional wisdom.’ He challenges the assumptions that firms are ‘profit maximizing’ and that demand and supply determine the allocation of resources. Galbraith believes that free enterprise tends to lead to monopoly, that economic growth does not imply growth in the quality of life, and that decision-making over resource allocation is primarily in the hands of the ‘technostructure’ managers and professionals in the big corporations and Government departments.

Galbraith’s works are all biased by a socialist’s view of the world rather than an objective economic analysis. Unfortunately, his extreme bias has lead him down a very dangerous path rendering most of his work as philosophy rather than economic science.