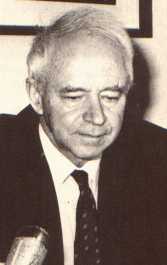 Colin Grant Clark was a British and Australian economist and statistician who worked in both the United Kingdom and Australia. It was Clark who pioneered the use of the gross national product (“GNP”) as the basis for studying national economies.

He was born on November 2nd, 1905 in London and was educated at Winchester and then Oxford. He later became a Lecturer in Statistics at Cambridge from 1931 to 1937. Among his works are The National Income, 1924-31, published in 1932, National Income and Outlay, 1937, The Conditions for Economic Progress, 1940, and The Economics of 1940 in 1942. During the fifties his book Welfare and Taxation challenged the economic rationale behind the Welfare State. Has written many other important books and articles and has lectured in universities round the world, as well as acting as advisor to several governments. One of his chief contributions to economic theory was his discovery of a correlation between taxation and inflation.