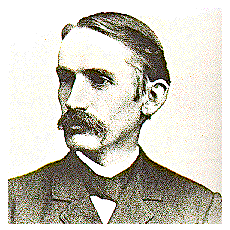 John Bates Clark was a American economist, educated at Brown University and Amherst College; later, he became a famous Professor of Economics at Columbia University. He passionately believed in the importance of economics, but was dissatisfied with the economic theory at his time. His answer to the problem was to reformulate the propositions of classical economics (Philosophy of Wealth (1851). In his Distribution of Wealth (1900) he applied the marginal principle to production and distribution (Marginal Productivity Theory).