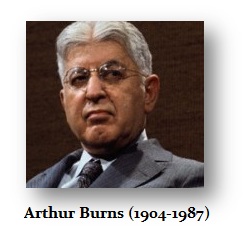 Arthur Burns was an Australian-born American economist. Taught at Rutgers University and Columbia. In 1950, he became President of the American Economic Association has built a considerable reputation for his work on business cycles. He chaired the Council of Economic Advisers under Eisenhower and later advised Nixon in his 1960 and 1968 Presidential campaigns. After the election, Nixon appointed Burns as Counselor to the President. He became Chairman of the Federal Reserve’s Board of Governors in 1970, a period of great economic instability. His chairmanship has been characterized by attempts to steer a middle course between ‘Monetarist’ and ‘Keynesian’ policies.

Nonetheless, Burns concluded that Business Cycle always won. He was the Chairman of the Federal Reserve when Bretton Woods Collapsed. He concluded that Keynesian Economics had failed and that the government was unable to control the economy as the collapse of Bretton Woods amply demonstrated. 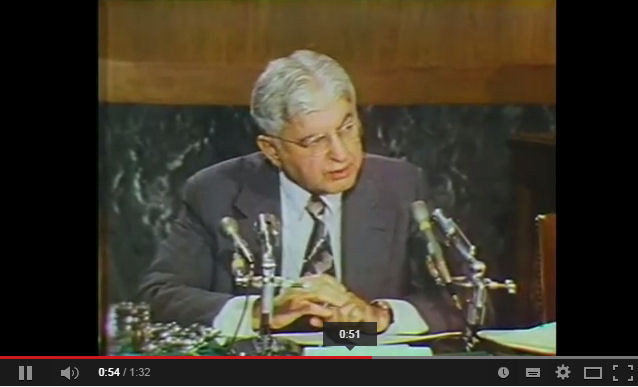 Arthur Burn’s testified before Congress on the economic crisis – the first to unfold in the new Floating Exchange Rate system that began in 1971. Keynesian Economics as practiced by the government was dead and taxes had risen to an outrageous 90% level until the first tax cut by Kennedy. Burns delivered his recommendation during the recession of 1975 that still remains sound advice today that the Democrats refuse to listen to – reduce taxes to stimulate the economy.

The unions at that time in 1975 always wanted to increase government spending and hand it to them in their own self-interest. Burns warned that would lead to ruinous inflation and it certainly did. Inflation soared into 1980 with gold and then the Fed Chairman Paul Volcker responded raising interest rates to excessive levels of 17%. Reagan cut taxes in 1980, but previously the Democratic Administrations refused to cut taxes under Jimmy Carter.