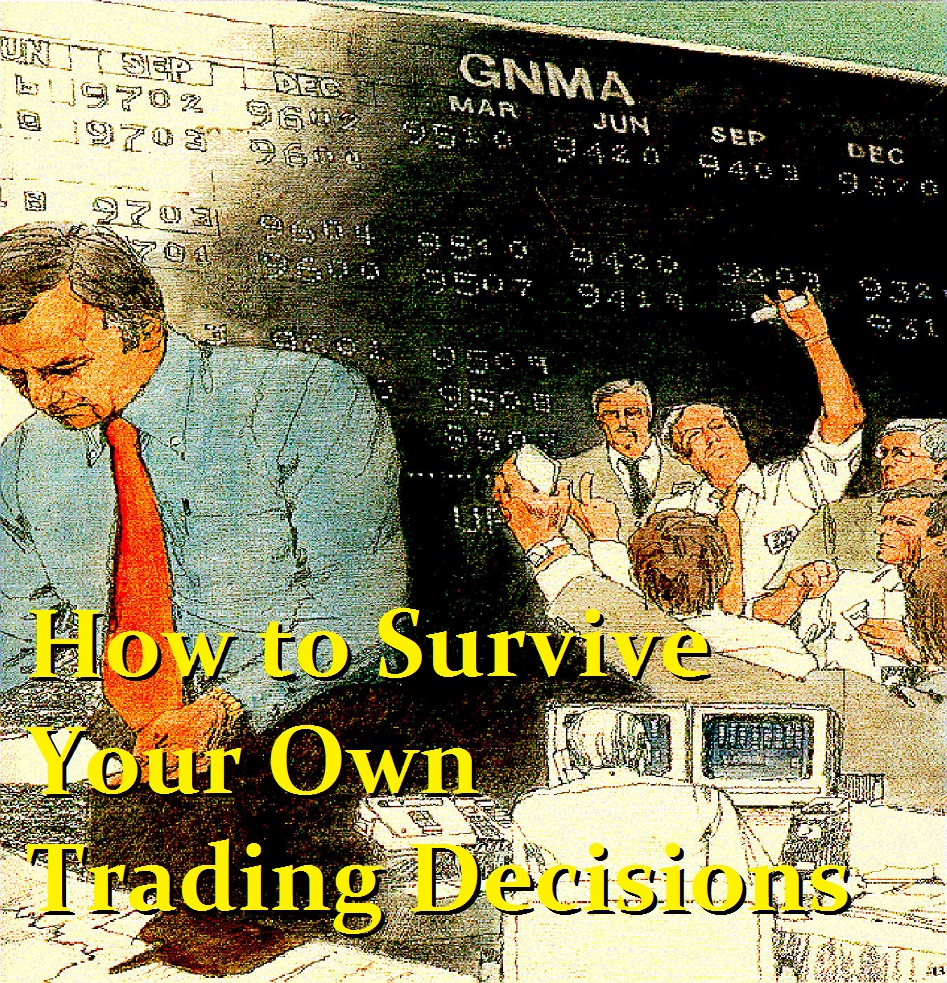 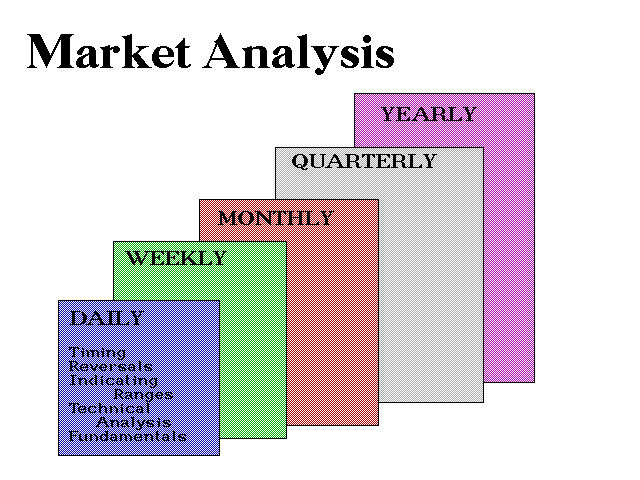 THE GREATEST ENEMY IS YOURSELF

The rise and fall of markets is driven by pure confidence. 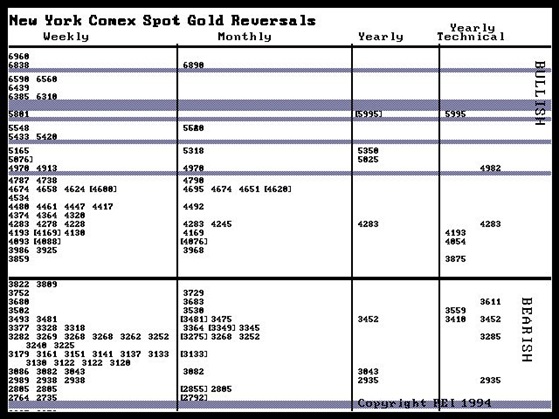 The design of our model is intended to eliminate human emotions as much as possible. The Reversals define the trend. The numbers are the numbers. This is not based upon how someone “feels” and they eliminate the cheerleading tendency that was once instilled into stock brokers in the 1960s and 1970s who just could NEVER bring themselves to ever say sell. That type of advice that always preaches just one side of a market is highly dubious.  Often it is followed by a shallow plus – by the way, call this number to buy. That is called “talking your own book.”

Regardless of the market, you have to extract the emotional swings. To survive your own trading decisions, you really have to become as STOIC as possible. The more STOIC you become in trading, the more money you will make. Remember one golden rule – it is what it is – nothing more, nothing less, and it is never what it could have been or ever what it should have been. There is no excuse that a market has been manipulated.  They can goose a trend in motion, but nobody can prevent a trend nor reverse a trend regardless of how much money period claim someone has.  Japan lost over $1 trillion trying to support the Nikkei share market. They destroyed the largest fund in history and they still have a 26 years bear market in motion. No amount of money can EVER honestly “manipulate” a market.

The “manipulations” we kept track of carried out by the New York crowd were never reversing a bull market into a bear or vice versa. What they did was they took silver from $3 to $7 and then crashed it again back to new lows. They did not prevent the bear market in silver from doing what it had to do. The best one can claim is that the perhaps extended the bear market just as the Japanese government took a normal 2 to 3 years bear market (like 1929-1932 in the USA), and extended it out for 26 years.

The Reversal System is the key. This allows us to specifically watch numbers. Often they may provide highs and lows. For example, in the Dollar-Yen, the dollar rose to 147 in the cash just before the Long-term Capital Market event in September 1998. The high was precisely the Monthly Bullish Reversal for the dollar. That is where it stopped dead and then collapse falling to 103.

Here are the reversals in the S&P 500 for the 1987 and 1989 stock market crash events. Looking at the Reversals allows you to see where there are “gaps” through which a market can trade without really changing trend. There is a rare event that we call a Double Reversal. This takes place when two of the four Reversals match precisely from a high or a low.

In the case of the 1987 Crash, we had a set of Double Weekly Bearish Reversals at 286.10. That was elected on the close of the week of October 12th, 1987 when the S&P 500 closed at 282.25.The next week opened at 269.00 and it collapsed to 18100. Look at the Reversals at that time. We warned that the market would fall 10,000 basis points. There was just no support whatsoever between 286 and 181. Hence, the Reversals allow you to see the gaps in support and resistance. These are NOT technical analysis. That is a different animal altogether and we will always state if a number is purely “technical” or a “reversal”. 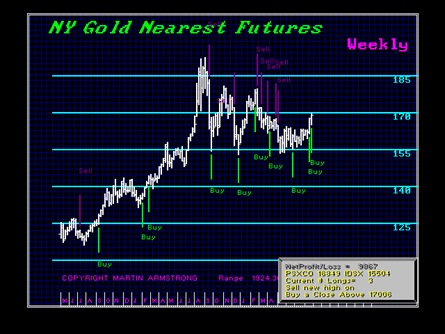 Trading just off of the Reversals provides a coherent way to understand the market behavior. Here is gold as of the week of August 27th, 2012. The Reversals are not intended to pick highs or lows. They are generally a trend “following” type system that requires the market to take action. They become an excellent way to gauge the real trend in a market. Just as the typical cheerleaders yell and scream at the tops, the Reversals allow you to filter that nonsense out.

Here we have provided four charts of gold basis different levels of TIME – Daily, Weekly, Monthly, Yearly. Purely using the Reversal System, we can see that each level produces different results. We can see on the Weekly Level, the model took some short position and then reversed and was long three positions. 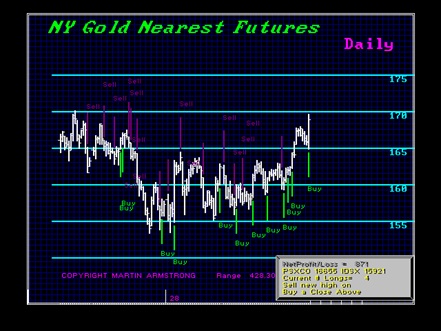 Looking at the Daily Level, we can see much more activity swinging back and forth between periods of bullishness and those when it turned bearish. If we were purely looking at a daily chart, one would think the switched directions often. This reflects more often the emotional yelling and screaming that accompanies the markets.

When we look at the Monthly Level, we can see that the Reversals did reverse and we see one single short position was taken. However, gold turned back to a bullish posture quickly thereafter. Now let us look at the Quarterly level. Here we can see that Gold is still in a long-term bullish trend. By looking at the four levels, we are able to paint a better picture of gold for the real world. 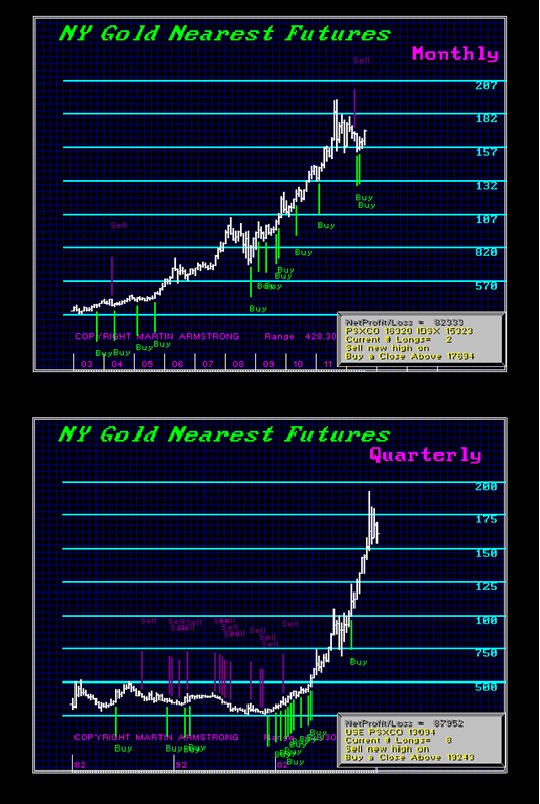 The Quarterly and Yearly levels simply remain bullish. This indicates there is no likelihood of a bear market developing. That typically is defined by a 2 to 3 year trend after the high. Yes, this means a CONSOLIDATION pattern whereby gold will not make new highs and it will test support treading water for 2 to 3 years following the September2011 high.

Now when we blend this long-term view with the shorter term, it makes it much easier to see why there has been a pause in the uptrend. From the Monthly level down, there has been some bearishness. This does not suggest the end of the world or that gold will enter a bear market.

This hopefully will allow you to see better how our model is not FLAT using one level of time. It requires a FRACTAL approach whereby we use all levels of time to see where we are really going to filter out the bias, yelling, and screaming.