The Superposition Principle is a very important occurrence in cyclical movement. In physics and systems theory, the Superposition Principle states that, for all linear systems, the net response caused by two or more stimuli is the sum of the responses that would have been caused by each stimulus individually. This principle applies to cyclical behavior within a single market which we can qualify as simply a linear system without interfacing it with all other markets that introduce a nonlinear system of super-complexity. 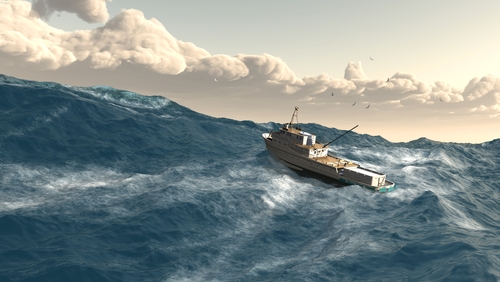 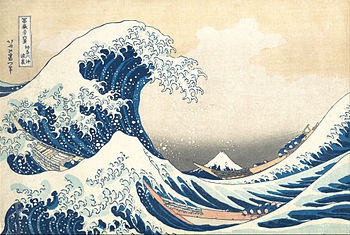 The oceans, sailors have told stories of “Great Wave” or “Rogue Wave” that appears out of nowhere. These legends of massive waves that sink ships have often been attributed to giant monsters of something supernatural. In reality, they can be simply explained as a “cyclical convergences” whereby numerous cyclical waves combine together and produce an abnormally “giant” or “large” wave that causes the amplitude of the individual waves to blend together producing the huge abnormal event. This is a Constructive Inference that produces these giant waves.

This famous Japanese print, known as the “Great Wave”, does not portray a tsunami caused by an earthquake. The Great Wave pictures what its title denotes, simply a large okinami, which actually means a “wave of the open sea.”  Until 1995, these “Great Waves” or “Rogue Waves” were known only from stories and legends of sailors. The 1972 movie Poseidon Adventure depicts an ocean liner which turned upside down by one of these waves. 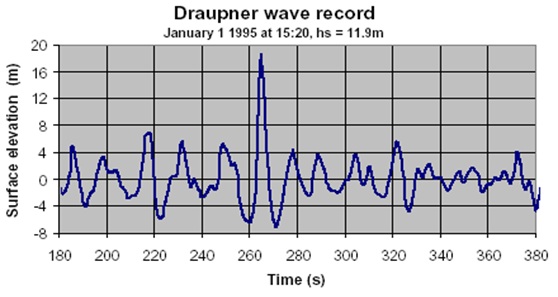 Finally, in 1995, there was the first measurement of such a wave known as the Draupner Wave. It struck the Draupner oil platform in the North Sea off the coast of Norway on January 1st, 1995. This provided the first opportunity to actually measure such a wave carried out by Engineer Paul Taylor.  The platform survived this event, but the wave, measured with lasers, was 84 feet high (25.6 meters) in a sea where the average wave only measured was 39 feet in height (12 meters). This provides us with a real world chart of exactly what a Superposition Principle is all about – how a Constructive Inference produces extraordinary events. 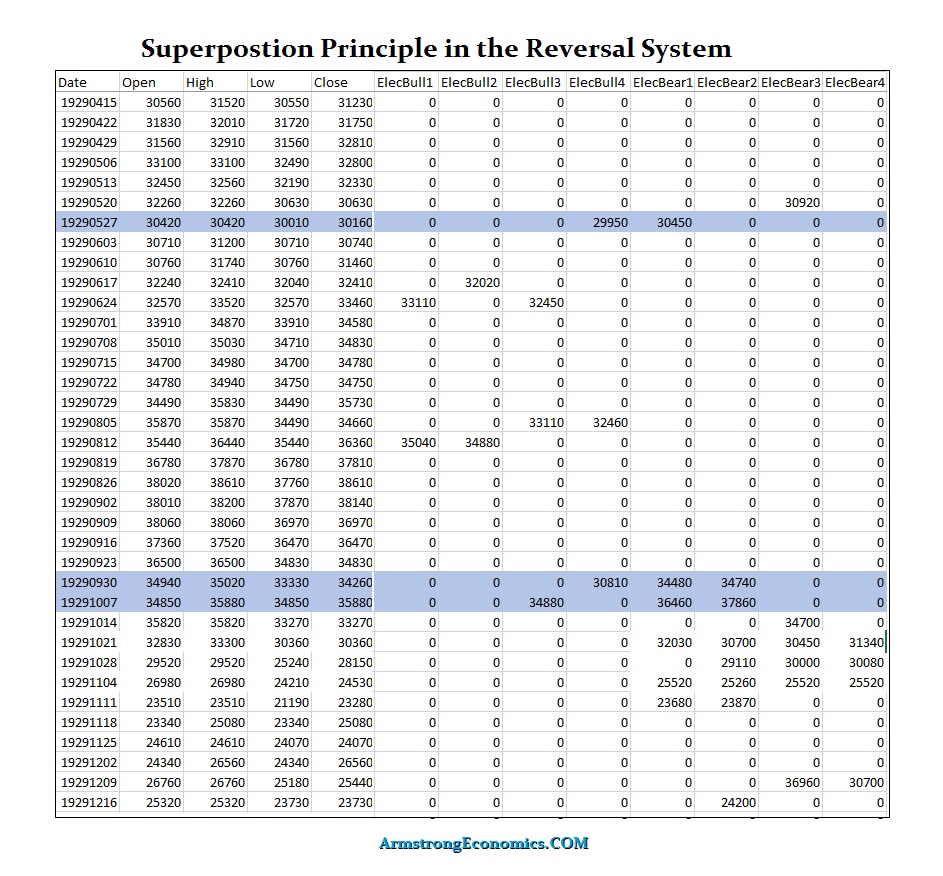 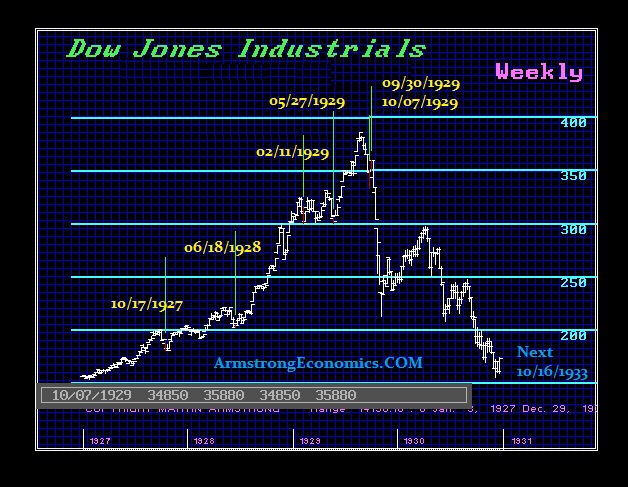 When we chart these Superposition Events in the Dow Jones Industrials going into the 1929 high, there were four events prior to the high. Each one produced a strategic reaction low. There was an exceptionally unique convergence that has NOT taken place ever since. The first reaction low after the September high took place the week of 09/30/1929. The indeed this Superposition Events confirmed the reaction low would hold as was the case with the previous four events. However, the cycles inverted and the very next week there was a Knee-Jerk one-week reaction rally for the week of 10/07/1929. This was also an extraordinary Superposition convergence back-to-back which then confirmed a major high was in place. The week of 09/30 elected two short-term bearish which were negated by a long-term bullish simultaneously elected. The very next week, again there were two short-term bearish elected, but this time it was an intermediate bullish that was elected. This time the two bearish overpowered the intermediate bullish and the market signaled it was entering crash mode. 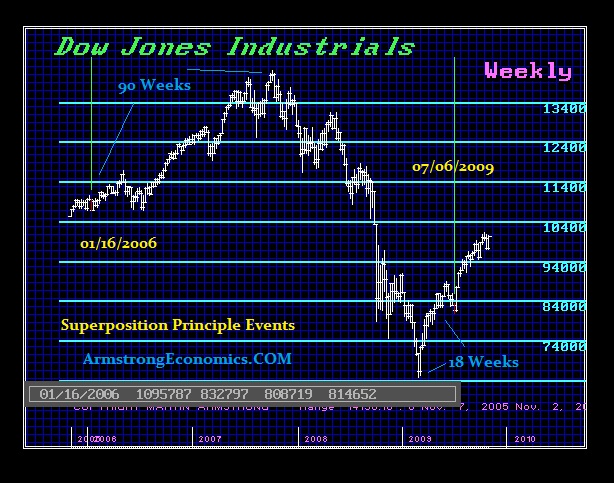 Here is the 2007 high. We can quickly observe that there were only two Superposition Principle convergence events and both produced reaction lows. The first took place the week of 01/16/2006 and this confirmed the reaction low which held and thus we rallied into the high. The second was a clear reaction low that marked the change in trend 18 weeks following the major low. 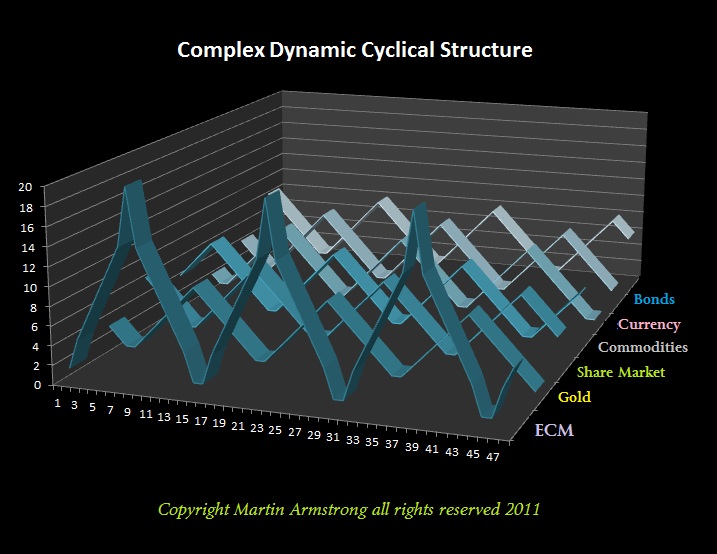 Consequently, these Superposition Events take place also within both the cyclical movements of markets as well as our Reversal System. They become much more complex when we interface all markets together. The complexity becomes extraordinary when we then interface all sectors on a global scale. The outcome is dramatic. We are then able to see the Economic Great Waves that sweep through the world economy and produce major events such as the Great Depression.