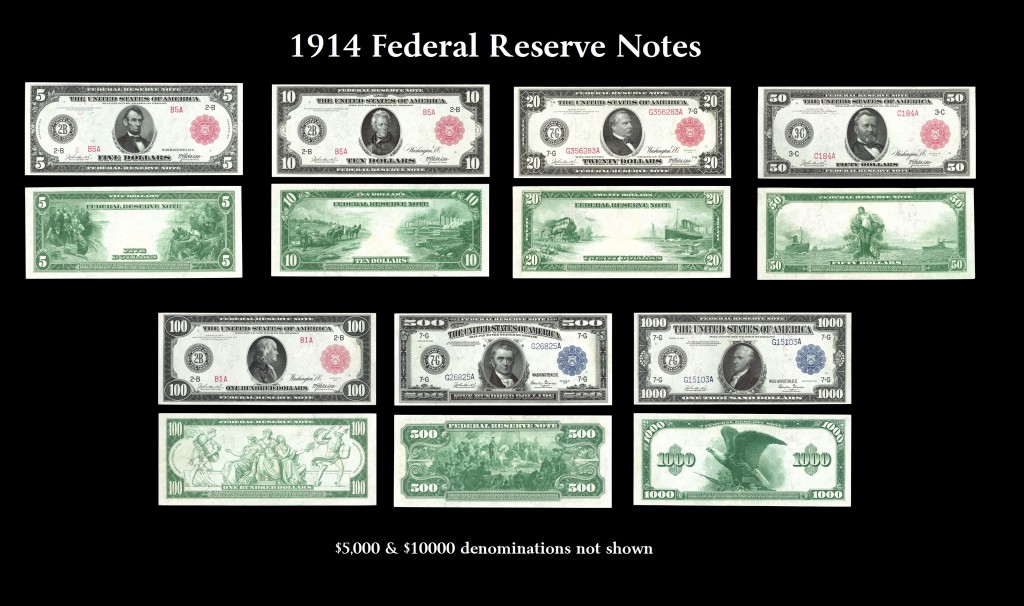 The Federal Reserve Bank Notes were also in­scribed “National Currency“; the Federal Reserve Notes are not so inscribed and are currency of the system as a whole rather than issued by individual banks in the system. The obverse designs of these two issues are mark­edly different while the reverses are similar.

“The United States of America will pay to the bearer on demand Dollars . . . This note is receivable by all national and member banks and Federal Reserve Banks and for all taxes, customs and other public dues. It is redeemable in gold on demand at the Treasury De­partment of the United States in the city of Washing­ton, District of Columbia or in gold or lawful money at any Federal Reserve Bank.“ 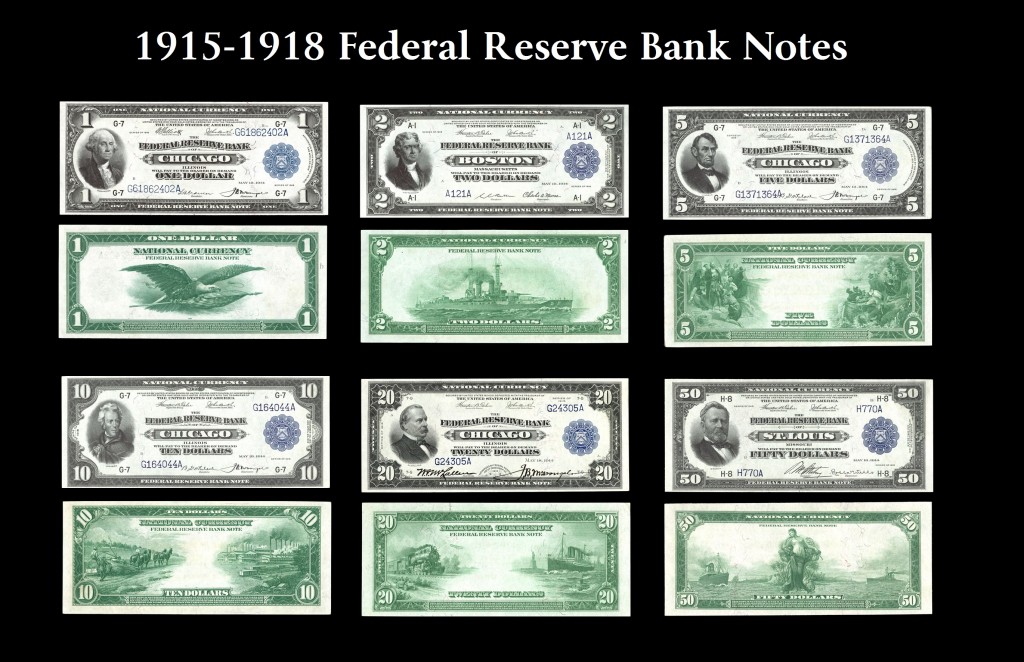 There were two separate issues of the Federal Re­serve Bank Notes, the series of 1915 and series of 1918. The first issue was authorized by the Federal Reserve Act of December 23rd, 1913 and consisted only of 5, 10 and 20 Dollar notes. These were not issued by all twelve banks in the system but only by the banks at Atlanta, Chicago, Kansas City, Dallas and San Francisco. The last-named bank issued 5 Dollar notes only. These notes are inscribed “Na­tional Currency” and are similar to the earlier National Bank Notes. The obligation to pay the bearer on demand is made by the specific Federal Reserve Bank and not by the United States. The obligation on the first issue of Federal Re­serve Bank Notes is similar to that on the National Bank Notes. There is a slight variance in the wording but not in the meaning.

The second 1918 issue of Federal Reserve Bank Notes was authorized by the Act of April 23, 1918. The notes were issued by all twelve banks. Part of the obligation on this issue differs from that on the first issue, as follows,

Federal Reserve Bank Notes are all quite rare for most were redeemed. The Treasury Department records only a little more than $2 million dollars is still outstanding out of a total issue of nearly $762 million dollars. Obviously, such notes were redeemed most likely prior to 1934 and the confiscation of gold under Franklin D. Roosevelt. To reduce the cost of printing currency, the notes were reduced in size to the current format by the Act of July 10th, 1929. After the enactment of the Gold Reserve Act of 1933, the obligation was changed to read:

Of course gold was no longer lawful money domestically, so exactly what could the notes be redeemed for was at best coins.