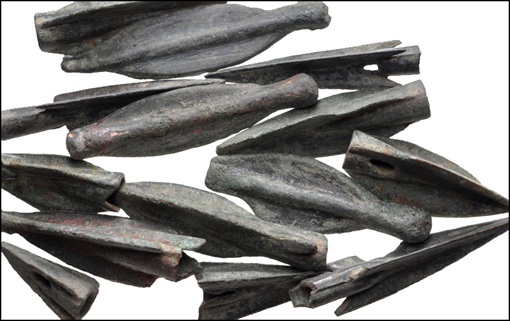 Black Sea Region began with copper arrowheads that were used as money. This lot of Æ Arrowhead Proto-Money. Includes: Leaf-shaped, trefoil, and triangular cast ‘arrowheads’ of varying length. The Greeks had also entered Ukraine and established Milesian colonies of Olbia, Borysthenes, Istros, Odessos, and Apollonia, which were founded on the western Black sea coast in the 7th century BC. These ports were once the central points of exchange and trade between the Greeks and local Scythian and Thracian populations.

This exchange prompted the introduction of pre-monetary items which were shaped into the ubiquitous more common ‘dolphins’ coins and the scarcer ‘arrowheads’ and ‘wheel-coins’ which were all cast in copper. These pieces remained in circulation in the west Pontic area for about two centuries, until being finally replaced by struck coinage.

Recent publications of finds from South Russia, Ukraine, Bulgaria, and Romania limited the circulation area of these proto-monies to the narrow coastal strip along the western/north-western shores of the Black sea. Some scholars suggested the ‘arrowheads’ were produced there since Apollo, with his bow and arrows, was the main deity who supervised the colonies of Miletus. As a god of archery, Apollo was well known with epithets as Aphetoros (“god of the bow”) and Argurotoxos (“with the silver bow”). 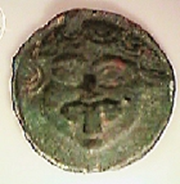 Even when coins came into use, Olbia still produced copper-cast objects that were simply now round. This is an example of such a coin which is quite large. It bore the face of a Gorgon with its tongue sticking out. These were cast during the 3rd century BC and continued into the 1st century BC. They were produced in two sizes – 70mm in diameter and 33mm.