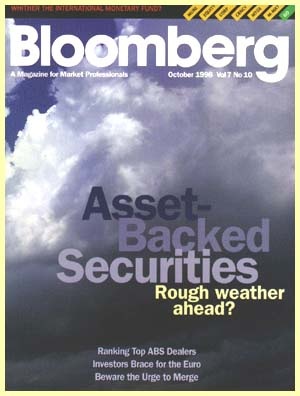 Whether Hunted or Buffetted, Silver Swings

Supply is the key issue when it comes to the price of silver, but the extent—and control—of supply in this market are not always what they seem.

If you ask Martin Armstrong, the silver market is lined with lead. A silver trader on the New York Mercantile Exchange (Nymex) for almost 30 years and chairman of Princeton Economics International, Armstrong sees a market with massive stockpiles, rising output, and falling demand.

Silver futures hovered just above $5 an ounce in mid-August 1998 after tumbling 30 percent beginning in early February. And Armstrong believes they’re poised to dive further. “You’ll see $3 silver before you see $10 silver,” he says. “If there were a legitimate shortage of silver, it would be back at $10.”

Armstrong’s dour view is based on skepticism about the market’s transparency. Whereas the silver mining industry maintains that the supply of the metal has fallen short of demand for the past three years—causing stockpiles in registered Commodity Exchange (Comex) inventories to fall 53 percent in the past year alone—silver’s headed for a nosedive to $3.25 in part because so much supply is hidden in private vaults and investors can be duped into thinking there’s a shortage when there’s not, Armstrong says. “My sources say there’s so much silver in London, there’s a shortage of space,” he says. “Dealers tell me they can’t get storage space.”

Along with existing supplies of silver, new quantities also could dampen the market. Companies are rushing to open mines because the metal is again profitable, especially when currency differences are figured in, says John Lutley, consultant to the Silver Institute, a producer-funded trade group. Lutley says silver prices have recovered from lows in the mid-1980s and early 1990s. In consequence, Mexico in particular has been increasing production because the peso is weak against the U.S. dollar, making silver mining more profitable. “Production could rise,” says Lutley, although, he adds, “you’d still have a [supply] deficit.”

The major debate in the silver market thus comes down to how many ounces either are in vaults around the world today or could find their way to those vaults in the near future. And because so much of that silver isn’t reported, traders can’t always tell when silver is scarce. Like others, Leonard Kaplan, chief bullion dealer and division manager of LFG Bullion Services in Chicago, says, “Comex stockpiles are representative in a long-term approach” to evaluating supplies of the metal. Still others in that market express doubts about the near term. “Stocks are appearing from somewhere,” says Adrian Lismore, vice president of metals and mining at Bankers Trust Co. “When you look at fundamentals, you have a tendency for the stocks [of silver] to not quite tell the full truth.”

Recent and not-so-recent doings in the silver market do much to explain the skepticism of some traders. In February 1998, for example, silver rose to a nine-and-a-half-year high of $7.28 an ounce, propelled bv reports of falling Comex stockpiles and by the disclosure bv Warren Buffett—the second-richest person in the United States, after Microsoft chairman Bill Gates—that his investment company, Berkshire Hathaway, controls 129.7 million ounces of silver, equal to about a fifth of world stockpiles. Since then, though, prices have plummeted as a rain of privatelv owned silver entered the market.

Buffett has not disclosed whether he’s hanging on to silver or bailing out, though analysts say he’s sold some of his stake. But overall, even though silver has still gained 22 percent for the year ending July 31, 1998, some think that Buffett, savvy as he is, may have been taken. “I think [Buffett] was misled by the stockpile numbers and the tightness of silver stocks,” says Lismore.

Investors in the silver market have in fact been led astray before in a big way. In 1980 silver was trading at about $18 an ounce as the Texas Hunt brothers were trying to keep their rickety financial empire from collapsing after running silver prices up to $50. Nelson Hunt and Herbert Hunt – who, with their brother Lamar, once had a net worth estimated at $65 billion – were ultimately convicted in 1988 of trying to corner the silver market. They lost an estimated $1.5 billion in that effort and paid $130 million in fines.

The Hunts’ attempt to corner the silver market doesn’t have much in common with Buffett’s investment. Indeed, the biggest difference is how much of their respective assets were wagered in that market, says William Davis, chief financial officer of Sunshine Mining & Refining Co., a Boise, Idaho, silver mining company. “The Hunts had everything in silver,” he says. When they couldn’t meet their market obligations, “they had nothing and were impaled on their own sword.”

Buffett, by contrast, says only about 2 percent of his holdings are in silver. He has a reputation for long-term investments in well-run companies, not in commodity investments.

The motivations and trading techniques of the Hunts and Buffett, too, differ greatly. The Hunts, for example, ran silver up from $11 an ounce in September 1979 to $50 four months later. Six weeks later, in March 1980, the market collapsed and silver was back to $11. By contrast, silver went from $4.32 an ounce on July 25, 1997, when Buffett made his first buy, to $7.28 an ounce on February 5,1998. Even with one dominant player investing in this market, it seems price jumps are limited during a period of low inflation.

Then there’s the matter of overall supply. In 1979, when the Hunts began buying, only 92 million ounces of silver were available to investors, according to a survey sponsored by the Silver Institute. And at one time, the Hunts owned more than 63 million of those ounces. A syndicate sponsored by the Hunts to corner the market owned much of the rest of the world’s silver, according to court papers filed in 1985 by the U.S. Commodity Futures Trading Commission. By comparison, Buffett’s 129 million ounces represent about one-fifth of the world’s supply.

Regulation of the silver market has tightened considerably since the Hunts made their big run. The Commodity Futures Trading Commission, the Bank of England, and the New York Mercantile Exchange all have taken the unusual step of announcing enhanced surveillance of the market. Nymex bumped up margin requirements to make sure speculators can meet their obligations should their bets turn sour.

Buffett’s full disclosure of his holdings is likewise at odds with the approach adopted by the Hunts. The Hunts used a variety of partners to help them hide the extent of their control of the market. The partners included Swiss banks and members of the Saudi Arabian royal family. “In-formation is the enemy of manipulation,” says Terrence Martell, former senior vice president and chief economist of what is now the Comex division of Nymex.

The different approaches to disclosure reflect in large measure the differing motivations behind the two investments in silver. The Hunt brothers bought silver as a hedge. They were convinced that their family fortune, built by oil wildcatter H. L. Hunt, was on the verge of being destroyed by inflation, which was running at more than 13 percent in 1979, according to a 1980 Washington Post article. The only true measure of wealth soon would be in precious metals, they believed. Buffett, though, in an environment of low inflation, has bought silver because his own analysis shows the metal’s price is bound to rise. He has noted that in the past three years the amount of silver used for industrial purposes alone was greater than the amount mined during that same period. Differences aside, there is perhaps one important lesson to be learned from the Hunts’ unsuccessful gamble that might carry over today: the tendency of new stocks of silver to appear very quickly when the price gets high enough.

By 1980 private stores of silver were beginning to pour onto the market and production was expanding rapidly to take advantage of soaring prices The Silver Institute survey showed a 200 percent increase in overall supplies to 296 million ounces. By 1981, 426 million ounces were available to investors. And about 660 million ounces were available by 1996. “When silver rocketed during the Hunt brothers’ time, silver came out of the woodwork everywhere,” says Tony Warwick-Ching, metals analyst at Flemings Global Mining Group in London. “A torrent came out of India, and that undermined them.”

It could happen again. Traders in India, the world’s second-biggest silver customer, see high silver prices as a selling opportunity. “People in this country are not going to buy at these [$7] prices,” says Suresh Sonawala, chairman of Mumbai-based National Refinery, one of India’s three largest gold and silver refiners. “Demand is dropping, and some people are [even] starting to sell their silver.”

Lessons of the past, however—although instructive—are not everyone’s sure guide to the future and in any case are never interpreted universally in the same way. Whereas Armstrong says that “Indian demand has fallen by 80 percent this year,” Kaplan looks forward to the Indian wedding season. “Jewelry manufacturers are on vacation now,” he says. “Demand will be restored” when the wedding season rolls around again.

Some even believe that if the circumstances are right, there could be a replay of what happened to silver in 1980. “It was $50 [an ounce] once. Why can’t it go back there again?” says Steve Weitz, investment executive at PaineWebber in Los Angeles. “I remember when it went up $10 in one day.”