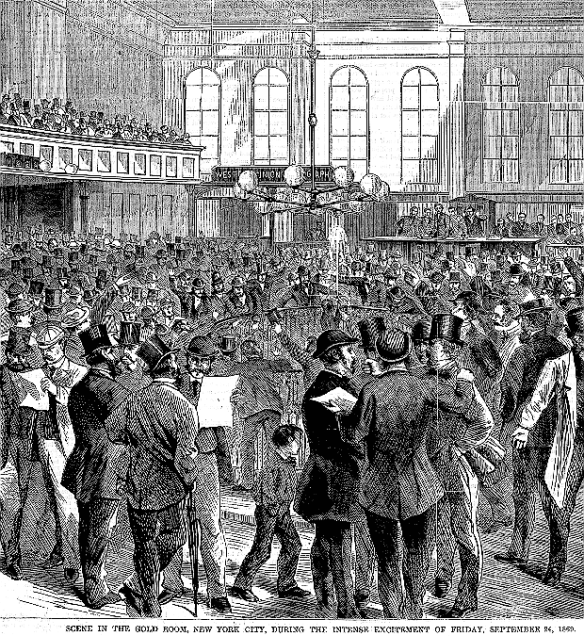 The period of 1864-1869 is an interesting one to say the least. The confidence in government was at an all time low. The infamous “Black Friday” was a term first coined to describe September 24, 1869. This was a day of financial panic of major proportions – so serious that the government called out the militia to suppress the mob which had stormed the banks hanging the tellers for one an all to see. 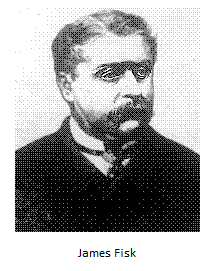 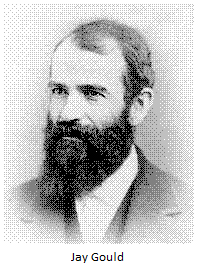 In an effort to corner the gold market, speculators, including Jay Gould and James Fisk, sought the support of federal officials of the Grant Administration in order to push the price of gold up before the US government returned to the gold standard after the Civil War. The intent of the scheme was to force the government to accept whatever free market price gold would reach on the open market as traded on the New York Stock Exchange at the time. The “gold-ring,” as came to be known, planned to corner the market forcing the price of gold higher and in the end, their intended exit strategy would be the government itself.

The gold-ring’s leader was Jay Gould (1836-1892). From the humble beginnings of a country-store clerk, Gould rose to control half of the railroad mileage in the Southwest, New York City’s elevated lines, and the Western Union Telegraph Co. Aided by James Fisk, he defeated Cornelius Vanderbilt for control of the Erie RR. However, this visible episode led to huge public protest over Gould’s stock manipulations and resulted in his expulsion in 1872. Gould then bought in the Union Pacific and other Western roads, and by keen business practices gained control over four rail lines that eventually made up the Gould system.

On September 20th Fisk and Gould began purchasing gold in New York City very aggressively. Their actions in the gold ring were vividly described in the following account from the New York Times:

“The excitement in Wall Street yesterday was even greater than on the previous day when the “street” was suddenly startled by the rapid descent in the price of Central Railroad stock, and the equally rapid advance in the quotations of gold. The violent movements of Wednesday, however, has prepared operators for a “heated term” yesterday, and early in the morning – at least two hours before the opening of the Gold Room and the Stock Boards – brokers and their customers began to make their appearance around the central points of attraction, and the adjacent streets and purlieus. By 9 o’clock the belligerent parties in the gold speculation had begun to take shots at each other, and it appeared from the outset that the bull side had an advantage which they were likely to hold during the day. Transactions were at once made at $142.50 or more than one point above the highest figures of the day before; and though at the regular opening of business, the quotation was one per cent below what had been previously touched, yet the bull party soon showed that they had not exhausted their strength in this struggle on the previous day. In a short time, amid intense excitement, the price began to rise, and it sold rapidly up to 144 and 144.25.” 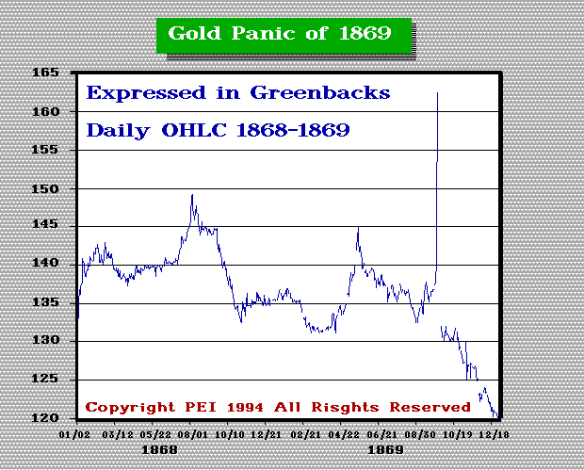 By September 24th, Fisk and Gould controlled enough of the available supply of gold in the city to bid up the price to $162 in terms of US paper greenbacks. This rapid increase in the price of gold sent the stock exchange into confusion, and the prices of commodities fluctuated wildly. A Panic ensued as people tried to withdraw gold from their banks and were turned away. It was this effect that led to the riots as the mob hung the bankers from whatever pole they could find. It was the open murder of the Bankers on Wall Street that day that prompted the government to send in the militia to suppress the riot that gave rise to the first coining of the term – “Black Friday.” 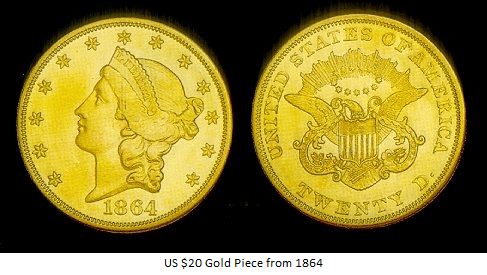 The run on gold was halted toward the close of the business day only when US Secretary of the Treasury George Sewall Boutwell announced that the federal government had made $4 million of its gold reserves available for trading. This was an excessive amount, which they did not actually have at the time. Nevertheless, the announcement broke the back of the gold ring and prices collapsed. Only later did the Treasury admit that they had made a “mistake” in the amount of gold that would be release in their press statement. Instead of $4 million, the amount was actually only $400,000. Real or not, the statement of by the US Treasury caused gold to collapse abruptly bringing the price from $162 to $133 within 15 minutes.

Fisk and Gould probably made a profit of about $11 million by their manipulations, but many claimed to have been ruined by the panic. The name Black Friday has lived on in history ever since. Today, the term “Black” has been used to describe numerous financial panics around the world despite the fact that only prices have fallen.

The Gold Panic of 1869 was by far the strongest rally of all time even surpassing the rally of 1980. Gold would eventually peak in September of 1869 only after making a substantial ten-fold rally as reported by the NY Times on September 24th, 1869.

The political corruption at the time was ramped and the President’s brother-in-law was rumored to be part of the gold-ring. It was reported that half of all businesses and banks in New York City folded as a result of this financial panic of 1869.

The lack of confidence at the time was sparked by not only the corruption within the Grant Administration, but also due to the existence of the “greenback” itself. Although the greenback was legal tender, it was not introduced until 1861. Between 1792 and 1861, the US government did NOT issue paper currency. Therefore, the introduction of the greenback was caused by the need to fund the Civil War and represented the first issue of a federal paper currency since the collapse of the Continental Currency of the late 18th century. Consequently, the unbacked status of the US paper currency of the time brought back horrid memories of the Continental Currency Crisis, which was still as fresh in the minds of the populace then as the Great Depression is today.

While the US greenbacks were first issued in 1861 by the US federal government in an effort to fund the Civil War, by 1865, more than $450 million worth of these issues were in circulation. Originally issued as “temporary”, the notes were to be recalled following the war. However, the hard times of 1867 led to demands, particularly by Western farmers, for an inflated currency through the creation of more greenbacks. A compromise was finally reached in 1869, whereby greenbacks to the amount of $356 million were left in circulation; the law authorizing them was declared constitutional in the Legal Tender Cases of 1868, 1870, and 1871. This issue of a paper currency reappeared during the Panic of 1873, with hard-hit agrarian, intensely opposed by conservatives, once again demanding creation of more greenbacks. The conservatives triumphed and the Resumption Act of 1875 fixed January 1st, 1879 as the date for redeeming all greenbacks. With returning prosperity, however, confidence in the government began to soar, and few greenbacks were surrendered. In 1879 Congress provided that greenbacks currently outstanding ($346,681,000) would remain as a permanent part of the nation’s currency.

The inflation that was created by issuing unbacked currency was viewed as a benefit in those days, particularly among commodity producers. There was even a Greenback political party for a few short years between 1874 and 1876 to promote currency inflation. Its principal members were Southern and Western farmers stricken by the Panic of 1873. They nominated Peter Cooper for president in 1876, but he received only 81,737 votes. Uniting with labor in the Greenback-Labor party (1878), they polled over 1 million votes and elected 14 representatives to Congress. Thus encouraged, and with a broadened program that included woman suffrage, federal regulation of interstate commerce, and a graduated income tax targeted at the rich, they nominated James B. Weaver for president in 1880. But the return of prosperity had suppressed the discontent, and their vote declined to a little over 300,000. Following the 1884 election, the party was dissolved with many of its members joining the Populists movement.