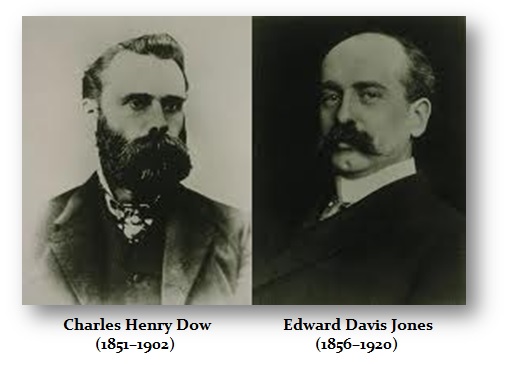 The founding of Dow Jones was established by Charles Dow, Edward Jones and Charles Bergstresser who over two decades conceive and commence three products which define Dow Jones and financial journalism: The Wall Street Journal, Dow Jones Newswires and the Dow Jones Industrial Average. The founders state their commitment to excellence in the Journal’s first issue: “We appreciate the confidence reposed in our work. We mean to make it better.”

Dow, Jones & Company’s first product is brief news bulletins hand-delivered throughout the day to traders at the stock exchange. Those “flimsies” as they are called later are aggregated in a printed daily summary called the “Customer’s Afternoon Letter.”

The first edition of The Wall Street Journal is published July 8. An afternoon newspaper, it covers four pages and sells for two cents.

The Ticker, the real-time newswire and the fundamental source for news in the investment community, is announced.

The Journal’s “Review & Outlook” column, which still runs in the Journal today, appears for the first time. It initially was written by Charles Dow.

Dow Jones is acquired in 1902 by the leading financial journalist of the day, Clarence Barron. Over the next 30 years, Barron recruits and develops a generation of journalists who further Dow Jones’s reputation for excellence. Those journalists would lead the company successfully through the Great Depression and into a new era of prosperity and progress.

1926
A motor-driven version of the “Ticker” – a key innovation in the delivery of real-time news – was developed by the Dow Jones engineering department.

The first issue of the Pacific Coast Edition of the Journal rolls off the presses on Oct. 21, eight days before the great stock-market crash.

1934
Afternoon edition of the Journal ceases.

Chief Executive Officer Casey Hogate begins a series of changes during the next decade that ultimately result in the metamorphosis of the Journal into a new kind of daily newspaper. One of these changes is advent of the “What’s News” column. Created by Bernard “Barney” Kilgore, that column was the first major summary of the news, a precursor to omnipresent summaries and digests on the Internet today.

Barney Kilgore takes over as managing editor of the Journal in 1941 and as CEO of Dow Jones in 1945, setting the company on a new and revolutionary course. In print, Dow Jones isn’t satisfied reporting “what happened”; our publications redefine journalism to include “what it means.” In business, the Journal would harness new technologies such as microwaves to open new markets to readers in distant cities.

The Journal wins its first Pulitzer Prize for editorials by William Henry Grimes.

The Journal launches a Southwest edition

The Journal launches a Midwest edition

When the New York Stock Exchange cancels its Saturday trading session, the Journal ceases publication of a Saturday edition

Making innovative use of microwave technology, Dow Jones is able to reproduce newspaper pages by facsimile over long distances – a vital step toward a truly national newspaper

Now with regional editions spanning the U.S., the Journal counts more than one million subscribers for the first time.
Back to Top
1967–2007 – Innovation and Globalization

Innovation would define Dow Jones in the 40 years after Kilgore’s death in 1967 as the news moved into space and online. Dow Jones pioneered the use of satellites to transmit newspaper pages and make possible a daily newspaper on truly national scale. A decade before the Internet, Dow Jones was storing and coding its news digitally so that it could be accessed online. Factiva’s content and technology tools set the standard for innovation and quality in the news and information industry. The Journal, Newswires and Dow Jones Indexes built successful franchises in Europe and Asia.

A joint venture with Bunker Ramo is the advent of electronic delivery of news from Dow Jones Newswires in an age before personal computers. It would also mark the company’s pioneering efforts to store news and information electronically, a business that would evolve into Factiva.

The initial version of the WSJ.com appears online. Content won’t be all that distinguishes the Journal on the Web. Dow Jones insists that its differentiated content is worth paying for and thus built the Internet’s most successful paid news Web site.

MarketWatch is acquired, adding a key component to what will become the Wall Street Journal Digital Network

The Journal resumes publication on Saturday with the debut of Weekend Edition.

Factiva is acquired, extending the company’s suite of business-to-business products.

Dow Jones is acquired by News Corp., the world’s most global media company.

Back to Top
2008 and beyond – Something Bigger

After News Corp. acquires Dow Jones in December 2007, and the horizons expand again. Now part of a global media company which includes Fox, SKY, HarperCollins and newspapers from London to Sydney, Dow Jones reinvents the Journal for a new era of news. Now the Journal covers more political and general news along with its leading business coverage. Fresh investment delivers new game-changing business intelligence tools as well as new markets in Europe and Asia. At a time when other media companies are retrenching, Dow Jones is moving aggressively to build on the success of the past and to capture the opportunity of the future.

The Journal is reconceived as a more complete source of news with expanded coverage of national and international events as well as more opinion, culture and sports.

Audiences expand. In addition to growth in paid circulation at the Journal, there are new local language products from Newswires in Spanish, Dutch and Arabic.

The company moves its headquarters to midtown Manhattan where at 1211 Avenue of the Americas it joins its sister companies at News Corp. under one roof.

Dow Jones tightens its focus on its core news and information business with the contribution of its Indexes unit to a joint venture operated by CME Group.

The launch of DJ FX Trader marks a significant new presence for Dow Jones in the foreign-exchange market.