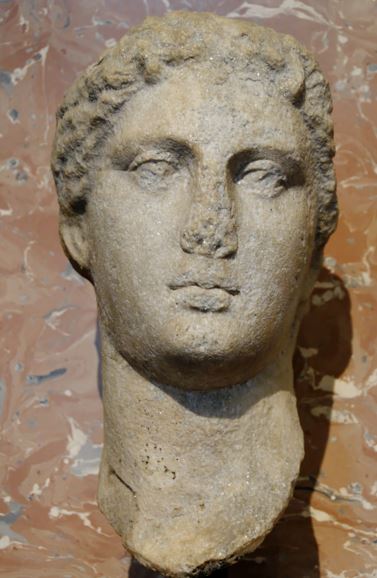 Wife and sister of Ptolemy II
Queen of Egypt & Libya

Arsinoë II was born in Macedonia, the daughter of Ptolemy I and his second wife Berneike. She was raised in Egypt at Alexandria where she most likely received her finishing-school education. Her early youth was spent in heated contest at court of Ptolemy I between the off-spring of her father’s first wife Eurydice, daughter of Antipater.

At the age of only 16, Arsinoë was married to Lysimachus, a member of the Diadochi , who was the 45-year-old military leader of Thrace in a political alliance.

At the court of Lysimachus, Arsinoë was most likely the dominant woman. Lysimachus dismissed his Persian wife, Amastris, for Arsinoë’s sake and Nicaea, his first wife and yet another daughter of Antipater. He also had an Odrysian wife by whom he had a son. Plutarch (Demetr. and Ant. 4. 1) considered Lysimachus to be a polygamist and his court was much like that of Philip II, father of Alexander the Great.

Arsinoë was his favorite at least for a while given the fact that Lysimachus renamed the city of Ephesus in her honor. Arsinoë had both prestige and considerable wealth and bore three sons to Lysimachus who she hoped would be heirs to the throne of Thrace.

Lysimachus had a son Agathocles by Nicaea, his first wife. Agathocles, much like Alexander to his father, proved to be a capable general in his own right. He was also gaining popularity among the people. To make matters worse, Agathocles took a wife with whom he too had sons. His wife was none other than the half-sister of Arsinoë – Lysandra by her father’s first wife.

Tension at court was perhaps increased with the arrival of Ptolemy Ceraunus – brother of her rival Lysandra. Ptolemy Ceraunus was rejected as heir to the throne of Egypt in favor of his half-brother, Ptolemy II – who had married Arsinoë I daughter of Lysimachus.Ptolemy I abdicated his throne in 285 BC and it was shortly thereafter that Berneike died, followed quickly by Ptolemy I in 283 BC. Arsinoë was now in danger of losing her position at court and something had to be done.

The epic struggle began between Arsinoë and her rival Lysandra and the victor would inherit the throne. Arsinoë had to defeat Agathocles and she managed to turn Lysimachus to favor her son. Lysimachus ordered the execution of Agathocles perhaps because of his popularity with the people and a sense that Agathocles may have plotted against his father. Whatever the reason for the execution of Agathocles, the net result created greater problems than it solved.

Following the death of Agathocles, Lysandra, her children, and most likely her brother Ptolemy Ceraunus fled to the court of Seleukos I. Their complaints of the injustice ofLysimachus perhaps provided an excuse for the invasion of Asia Minor. After all, taking Lysimachus would make Seleukos I ruler of most of the former empire of Alexander the Great with the exception of Egypt.

Lysimachus, who was 80-years-old at the time, went out to meet Seleukos I, now 78-years-old, in battle and was defeated and killed at Korupedion (Corupedium) in February of 281 BC. In the months that followed, Arsinoë managed to escape to Macedonia with her sons. Meanwhile, Ptolemy Ceraunus was mistakingly befriended by Seleukos I. Ptolemy Ceraunus killed Seleukos I and soon gained at least partial recognition as ruler of Macedonia.

The disastrous consequences that followed provide some insight into why inter-marraige between brother and sister developed in Egypt. Clearly, Arsinoë, felt her situation quite desperate or she would not have considered such a groom. Ptolemy Ceraunus swore a solemn oath that he would adopt her sons, recognize their places in the succession, and not marry another woman or have children by another women. Such a public promise illustrates Arsinoë, desire perhaps to seek a throne without court rivals and that Ptolemy Ceraunus’ guarantee against polygamy suggests that he was well aware of the appeal of such a guarantee to a royal woman during this particular time. Arsinoë, also perhaps felt that her eldest son could succeed without the support of Ptolemy Ceraunus, despite his personal objection.

Following the marriage, Ptolemy Ceraunus indeed proved that his character was blacker than the deepest night. Ptolemy Ceraunus murdered Arsinoë two younger sons and drove Arsinoë herself from Macedonia. Arsinoë eldest son appears to have disagreed with his mother’s judgement and fled at about the time of the wedding.

Arsinoë returned to Egypt, to the court of her brother Ptolemy II. Once again, Arsinoë was involved in a dynastic struggle against her brother’s first wife, Arsinoë I – a daughter ofLysimachus by Nicaea and thus the sister of Agathocles. About 278 BC, a few years after the defeat of his wife’s father Lysimachos, Ptolemy II accused Arsinoe I of complicity in a plot against his life and banished her to Coptos, in Upper Egypt. Shortly thereafter,Ptolemy II married his sister, Arsinoë.

Arsinoë thus received both status and power in Egypt. There is no record of her keeping contact with her eldest son. Therefore, having no children by her brother, she was forced recognize the children of his first wife as heirs to the throne of Egypt.Arsinoë’s experience with the drawbacks of polygamy by a royal king both with her father and with her husband, contributed to the decline of royal polygamy in the immediate years thereafter. Multiple and competing heirs by different mothers served only to divide the royal household. It was indeed this competition that destroyed the dynastic hopes of Lysimachus. Thus, Ptolemy II shared this troubled past in his struggle against his half-brother. By choosing Arsinoë as his wife, Ptolemy II rejected polygamy in favor of its extreme opposite, royal sibling marriage that consolidated the dynasty rather than dividing it as did polygamy.

Arsinoë was very popular with the people of Egypt and this helped to stablize the monarchy. She was a brilliant advisor and state administrator. Her intellect and passion for knowledge and art helped to transform Alexandria into the scholarly city of the ancient world building upon the great library founded originally by her father. It was also Arsinoë’s skill in foreign policy that help to win her husband’s campaign against Syria.

In 271 BC, at the age of only 45, Arsinoë suddenly died. Her husband/brother Ptolemy II ultimately had her deified and many people worshiped her as a goddess. Indeed, her portrait continued to appear on postumous coinage even as late as Ptolemy VI.